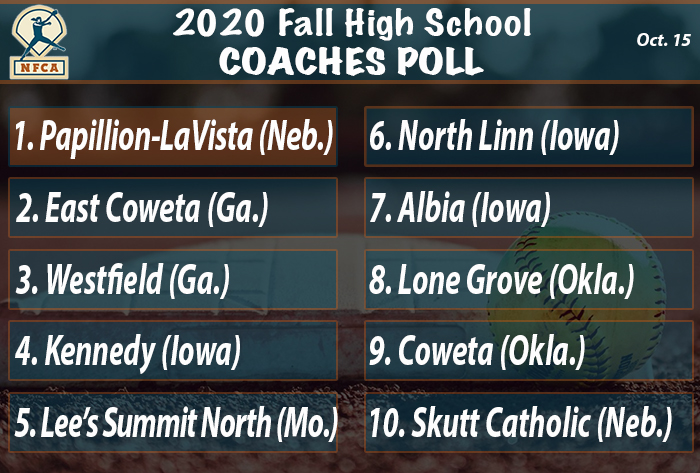 Unbeaten Nebraska juggernaut Papillion-LaVista continues to lead the way at No. 1, after blanking Gretna, 8-0, in the district championship last Thursday, and collecting two more shutouts yesterday in the state tournament. On Wednesday, Mia Jarecki led off the game with a home run and Jordyn Bahl tossed a no-hitter in a 10-0 victory over Papillion-LaVista South. After that, Bahl and Bailee Lampman teamed in the circle for a 14-0, five-inning win over Omaha Marian.

The (34-0) Monarchs have now won a state-record 70 straight games, and play North Platte today in the next round, as they continue to march toward a second-straight Class A crown.

Meanwhile in Georgia, East Coweta (26-1) scored a 12-4 triumph over familiar foe Newnan in the Region 2-7A tournament, and will await the winner of today’s loser’s bracket final. No. 3-ranked Westfield (20-2) won its regional crown for the fourth year in a row and plays Bulloch in the best-of-three GISA final four starting Saturday.

Broomfield’s 7-5 loss in the Colorado state quarterfinals to eventual 5A finalist Cherokee Trail (17-3), allowed Missouri’s Lee’s Summit North (25-3) to crack the top five on the strength of two lopsided wins. Junior Cierra Harrison fanned 14, and notched her 600th career strikeout, in the Broncos’ 8-2 victory over Blue Springs on Wednesday in their playoff opener.

Both Cherokee Trail and Colorado 3A titlist Eaton (18-2) joined the Top 25 this week, while Holy Family (18-2) gained three spots after claiming its second Colorado 4A title in the last three years.

Cherokee Trail lost 5-1 in the championship game to Fossil Ridge (17-3), which captured its first 5A title in four appearances. Meanwhile, the third time was the charm for Eaton, which also reached the state final in 2015 and 2018, but this time had 13-year-old freshman pitcher Sadie Ross in the circle. Ross drove in the first run for the Reds and also struck out 12 in the championship game.