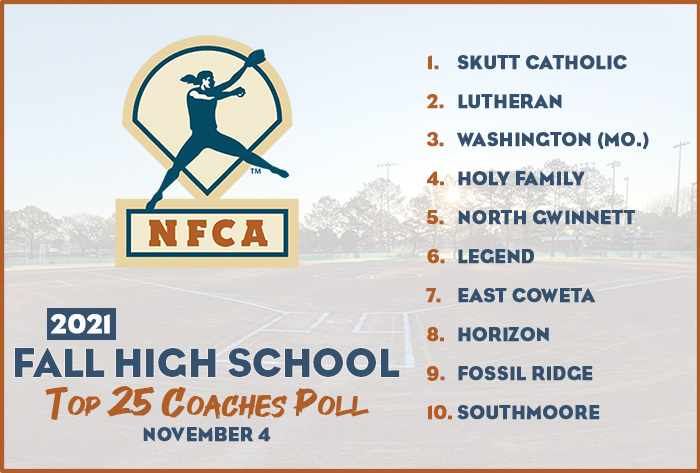 LOUISVILLE, Ky. — There was a surprising amount of jostling this late in the season, but no doubt about the top two in the final NFCA Fall High School Top 25 Coaches Poll.

Top-ranked Skutt Catholic (33-0) wrapped up the first perfect season in the 25-year history of Nebraska’s Class B three weeks ago, in a state final that lasted just three innings due to the run rule, while Lutheran (29-0) claimed its first Colorado state 3A title two weeks ago in just its second season of existence.

And then that’s where things got interesting.

Reigning Georgia state champion East Coweta (27-3), who had been ranked third the last five weeks, lost twice last Saturday in the Class 7A Elite Eight tournament to North Gwinnett (31-5-1), including 7-2 in the championship game, to fall to seventh. The two teams also faced off in last season’s final, with perennial power East Coweta winning its third crown in the last four seasons. North Gwinnett previously won the state title in 2016, and the duo have teamed to win five of the last six 7A crowns.

Meanwhile, Missouri also wrapped up its season, with several ranked teams playing each other in the state final four.

Blair Oaks (32-4) is the other new team joining the final ranking, after claiming the Missouri Class 3 state title. The Falcons won 23 of their last 24 games, including 12 straight.