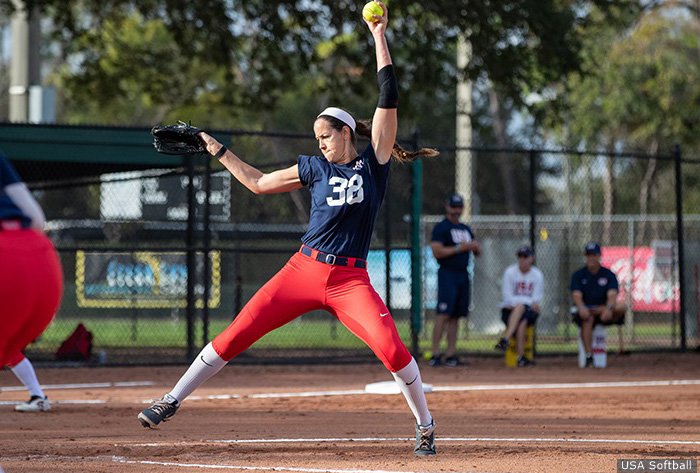 OKLAHOMA CITY — USA Softball announced the 18 athletes that will make up the United States Women’s National Team's (WNT) roster for the 2019 season.  Selected by members of the Women's National Team Selection Committee (WNTSC), these athletes will compete in select tournaments/invitational events before the final 15-player roster for the Pan American Games will be finalized.

“This was without a question the most competitive trials that USA Softball has had in many years,” said 2019 WNT Head Coach Ken Eriksen (head coach at USF).  “The level of talent was undeniable and without question some of the best in the world. After two successful World Championships in 2016 and 2018, we knew this was going to be great to watch but hard to narrow down the field to 18 this summer.”

Every member on the 2019 roster has competed for the Red, White and Blue either as a member of the WNT or Junior Women’s National Team (JWNT).  Highlighting the roster are two Olympians, while 13 members return from the 2018 World Baseball Softball Confederation (WBSC) World Championship roster that won gold and also qualified for the Tokyo 2020 Olympic Games.

Collegiately, 11 NCAA Division I universities have student-athletes on the 2019 training team roster – Florida leads with four followed by UCLA with three, California and Oklahoma with two, while Alabama, Arizona, LSU, Oregon, Tennessee, Texas and Washington are each represented by one student-athlete.

Announced in fall of 2018, Eriksen will lead the Red, White and Blue in their quest to remain the No. 1 team in the world.  The complete coaching staff and list of National Team events, including exhibition games, will be released at a later date.

“The 2019 USA Softball Women’s National Team will have a tremendous amount of experience,” Eriksen continued.  “There are Gold Medals from the Olympics and multiple Pan American Games and World Championship titles. Every pitcher has international experience and every player has represented the United States in the past 17 years. Anytime you can coach a team with that much experience, it will tend to make anyone sleep better at night.”