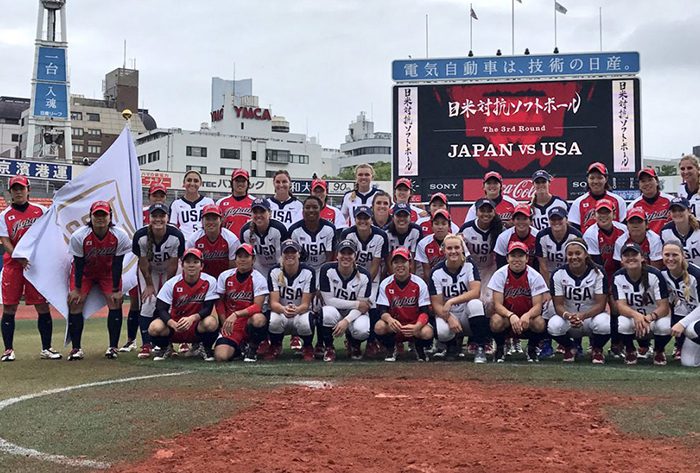 YOKOHAMA, Japan —  In front of over 10,600 fans, World’s No. 1 ranked Japan Women’s National Team defeated No. 2 USA 5-3 after a walk-off grand slam off the bat of Yu Yamamoto. The victory solidified Japan as the winner of the three-game WBSC-sanctioned 2017 USA vs. Japan All-Star Series.

After USA evened the series following a 5-4 victory in Game 2 at Shellcom Sendai, fans were treated to a glimpse of what could be the Gold Medal game come the Tokyo 2020 Olympics with the world’s top two teams going head-to-head at Yokohama Stadium

With both sides kept scoreless through the first frame, Japan struck first in the second inning after an RBI single by Yamato Fujita to left giving them an early 1-0 lead.

USA evened up the scoreboard in the top of the fourth, courtesy of a lead-off home run by Valerie Arioto. Ally Carda then stroked an one-out RBI single to give the U.S. a 2-1 lead.

A leadoff long ball by Ali Aguilar extended USA's lead to 3-1 in the sixth.

Following an error to put the leadoff runner on, Kelly Barnhill entered the circle for the U.S., but a walk to Yuka Ichiguchi prompted another pitching change. Jessica Moore induced a fly out to center field and a grounder back to the circle. After a pitching change to Carda, Japan’s Natsuko Sugama drew a walk. With the bases loaded, Yamamoto homered giving Japan the walk-off win in front of the home crowd.

“Sometimes the toughest three outs to get in a game are the last three,” said Head Coach Ken Eriksen. “Our team played well coming from behind and the pitching staff battled all day in an unfamiliar environment. Team USA is finding out a lot about ourselves and we are looking forward to five days of rest and recovery before heading to OKC.”

Up next for both Women’s National Teams is the WBSC-sanctioned World Cup of Softball XII, held at the USA Softball Hall of Fame Complex in Oklahoma City, USA 5-9 July.