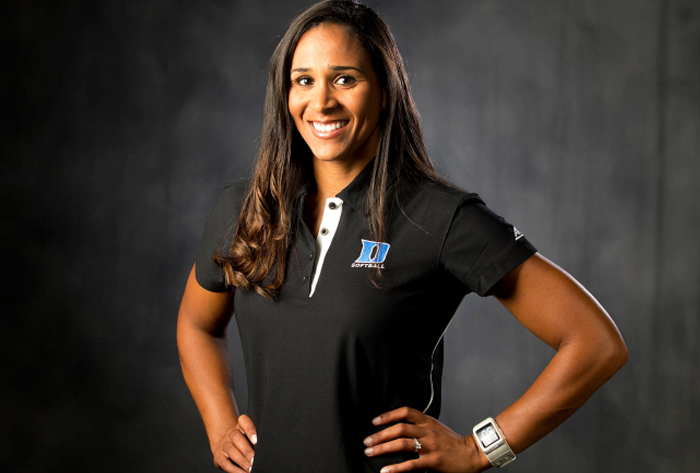 DURHAM, N.C. – Former Big Ten Player of the Year Marissa Young will be the first head softball coach at Duke University, announced by Vice President and Director of Athletics Dr. Kevin White on Wednesday. Young spent the past two years as an assistant coach at the University of North Carolina.

“In Marissa Young, Duke was able to secure the talents of one of the brightest young stars in the softball coaching profession,” Dr. White said. “Her pedigree as both a coach and a player is simply spectacular. Having played for, and excelled in, one of the premier programs in America at Michigan, Marissa understands winning at the highest level of college softball.  Even more impressive is her advocacy, energy and passion for student-athletes.  Unequivocally, we believe she is the right coach to build an amazing softball program from the ground up here at Duke. We are ecstatic she is joining the Duke family.”

“First and foremost I want to thank God for blessing me with this opportunity,” Young said. “I am honored by Dr. White's belief in me and entrusting me to start the softball program at Duke. Starting a program is a once in a lifetime opportunity, but to do it at one of the nation's most prestigious schools academically and athletically is a dream come true.  Success is not a single event but a process.  After meeting with Dr. White, I was confident in his visionary leadership and commitment to the process of making Duke Softball successful.  The excitement on campus and within the athletic department about the start of our program has been astounding. I look forward to building this program from the ground up and to carry on the successful tradition of Duke athletics both on and off the field.

Young was a three-time All-America selection as a pitcher at the University of Michigan and was named the 2002 Big Ten Pitcher of the Year and 2003 Big Ten Player of the Year. At North Carolina, her primary responsibilities included coaching the pitchers and catchers.

In the spring of 2015, Young helped the Tar Heels to a 37-16 overall record and a berth in the NCAA Tournament after the squad won 24 contests the prior season. Young’s pitchers posted a 3.30 earned run average with 234 strikeouts in 335.1 innings pitched.

Young spent the 2012 and 2013 seasons as an assistant coach at Eastern Michigan, where she served as the compliance liaison, recruiting coordinator and managed team travel and the operational budget, among other duties.  She helped coach five Academic All-America picks and five player of the week selections during her tenure at Eastern Michigan.

Prior to her stint at EMU, Young was the head coach at Concordia University in Ann Arbor, Mich., from 2008-11. In less than three years, she turned the 2-20 program to a 23-23 record, the second-most wins in a single season since an appearance in the 2002 NAIA National Tournament.

Young graduated from Michigan in 2003 as the all-time strikeout leader (927) and her 88 career wins became the second highest in program history. She also matched the then-program single-season home run record with 13 in 2003.

Young played two years of professional softball, one overseas in Italy and the second year with the Texas Thunder of the National Pro Fastpitch.

In addition to the hiring of Young, plans for a new softball stadium are already in progress. The program is scheduled to allot the NCAA maximum 12 scholarships within the first four years of competition. Currently, Duke fields a club softball team that doesn’t provide scholarships or compete on the varsity level -- an NCAA Associate Club sport that competes against similar teams from other universities.