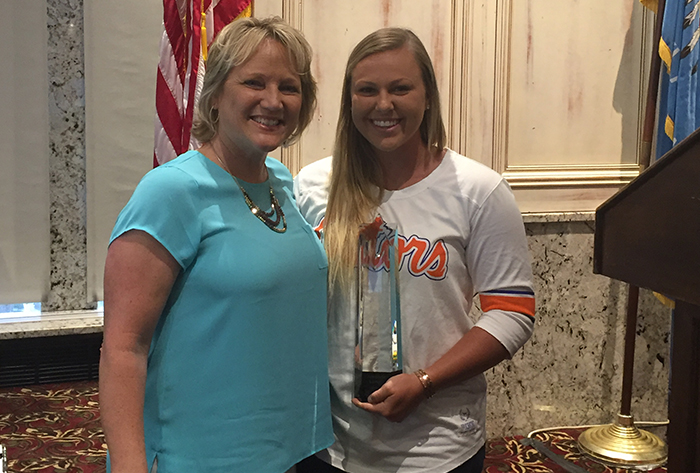 OKLAHOMA CITY – The University of Florida’s Amanda Lorenz was named 2016 Schutt Sports / NFCA Division I National Freshman of the Year, announced Tuesday evening at the 2016 NCAA Women’s College World Series banquet. Lorenz was presented the award by NFCA Executive Director Carol Bruggeman during the banquet at the Petroleum Club in downtown Oklahoma City.

Lorenz is the fourth (co-recipients in inaugural year) winner and the third from the SEC, in the brief history of the award, which was established in 2014. She he joins a small, but prestigious list that includes 2015 selection Paige Parker of Oklahoma and inaugural co-winners, Kasey Cooper of Auburn and Annie Aldrete, at the time a player at Tennessee.

“It was a huge honor and I am humbled by it,” said Lorenz. “My heart was beating really fast when I was standing there. Being friends with both Kelly (Barnhill) and Shay (Knighten), I was excited for both of them and the amazing seasons they had. I am very proud to represent the Gators and to wear the orange and blue.”

A first-team NFCA All-Southeast region selection, Lorenz ranks among the SEC leaders in several offensive categories with a team-leading .403 batting average, 73 hits, 14 doubles, 48 walks and 56 runs scored. Starting every game, the Moorpark, Calif. native also left the yard eight times and drove in 48 runs. In addition, she was named the SEC Freshman of the Year and garnered first-team all-conference honors, the first Gator in program history to do so.

“Amanda was consistent and great for us all season long," said Florida head coach Tim Walton. "Her numbers speak for themselves, but I’m excited for her to be rewarded with this very special honor. Amanda is a great teammate and fun to coach. I’m excited for her to compete with the U.S. Women’s Elite Team this summer and come back to Gainesville this fall even better.”

Lorenz was joined in attendance by the other two finalists - teammate Kelly Barnhill and Oklahoma’s Shay Knighten, as well as past winners Cooper and Parker, whose programs were present at the banquet.

With the Association always searching for innovative ways to promote the sport of softball, the award was created in 2014 from an idea to honor outstanding athletic achievement among freshmen student-athletes throughout Division I.