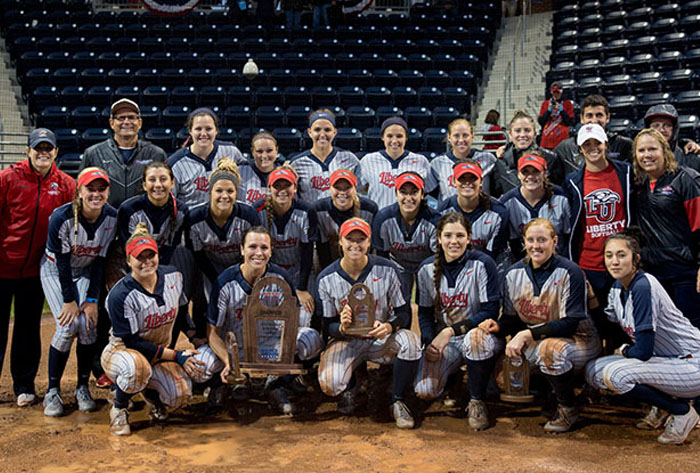 The Lady Flames (46-24) won five straight elimination games this week, taking the championship trophy from a field of 26 at the beginning of the tournament. Liberty eliminated Cal Poly, Illinois State, Kennesaw State and Lamar in that order this week to gain the title. Lamar (34-31) finishes as the inaugural NISC runner-up, falling twice to Liberty today. Liberty defeated Kennesaw State, 13-5, earlier today, before downing Lamar twice, 8-5 and 3-1.

Beginning with the NISC Regional, Liberty went 8-2 in the tournament as a whole.

The game was called during the bottom of the sixth inning, after Lamar had scored four run in the top of the frame to take a 5-3 lead. With two outs in the home half and two Liberty runners on, the skies opened, worsening the field that had already taken considerable rain over the last 24 hours.

Under NCAA rules, the result reverted to the last completed inning, giving Liberty the championship.

Junior Tori Zavodny became the hero in the championship’s first contest against the Cardinals. With two runners on, trailing Lamar 5-4 and down to final three outs, Zavodny rocketed a home run over the right field fence to jump on top, 7-5. The Flames would add an insurance run and hold on to force the “if” game in the double-elim format, winning 8-5.

Pitching was the early story in the second game between the Cardinals and Flames. Through the first two and one half innings, each team’s offense was relatively silent. Then came the Bishop sisters. Amber and Autumn each dialed up a single before Alexia Taylor drove the first run of the ballgame. Two more runs in the inning gave Liberty the 3-0 advantage.

Brynn Baca kickstarted Lamar in the fifth inning and would eventually score via an RBI single from Kenzie Meeuwsen.  Laura Napoli and Anissa Rodriguez each pitched well for the Cardinals, combining for three strikeouts and only two walks.