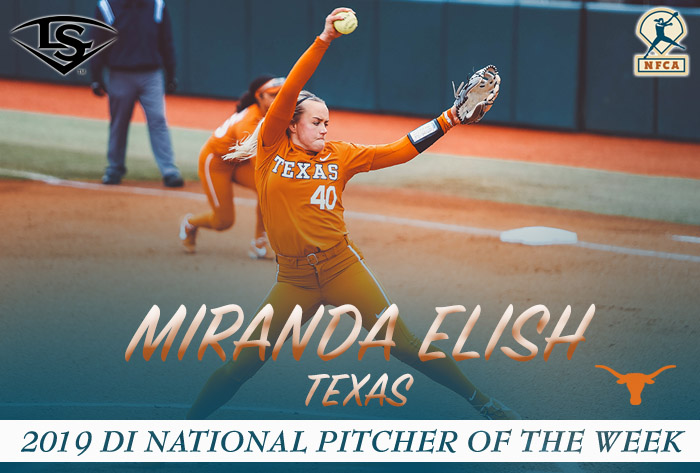 LOUISVILLE, Ky. – Florida’s Kendyl Lindaman and Texas’ Miranda Elish were named Louisville/Slugger NFCA Division I National Player and Pitcher of the Week of the Week, respectively, for games played March 18-24.

Lindaman homered in all four games for the Gators last week, as all six of her hits left the yard. She homered twice in both contests against Mercer and launched the game-winning long ball in a 2-0 win over then-No. 20 Minnesota. The junior catcher finished the week with a 2.000 slugging percentage, 13 RBI, seven runs scored and a .600 on-base percentage. The Ankeny, Iowa native’s two-run shot against the Gophers came in the first inning, as did her roundtrippers against LSU and Mercer (game two). Lindaman connected on two three-run bombs and drove in six in game one versus the Bears.

Elish, a junior from Crown Point, Ind., keyed the Longhorns to a perfect 4-0 week by going 2-0 in the circle with a no-hitter and 20 strikeouts, while also contributing at the plate with a .364 average, grand slam and five RBI. In her second outing of the week, she tossed a five-inning no-hitter with eight punchouts against Iowa State. Additionally, she was 2-for-4 at the plate with the game-ending grand slam and five RBI. The Big 12 Pitcher of the Week took a no-hit bid into the seventh in her first start of the week at Lipscomb. Elish finished with 11 K’s in a one-hit shutout of the Lady Bisons.