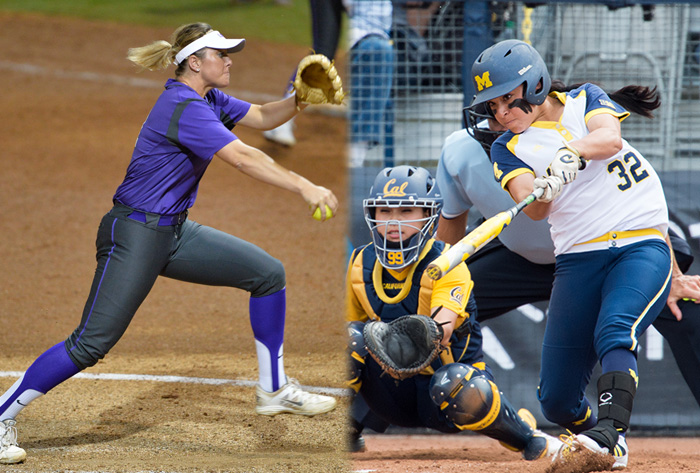 Romero, a senior from Murrieta, Calif., hit .500 (10-for-20) with two doubles, a triple, home run and 13 RBI helping the second-ranked Wolverines to a 6-0 mark with five of those victories against programs either ranked or receiving votes in the USA Today/NFCA Division I Top 25 Coaches Poll. The second baseman boasted a pair of four-RBI outings against then-No. 18 Missouri and RV Long Beach State and added a three-hit, three-RBI effort versus North Carolina.

"Having success at the plate really helps with my overall confidence, because I know I can get the job done even if it takes me a few at-bats to get going,” Romero said. “But to be honest I don't know if I'll ever be satisfied with my hitting. My biggest thing and our team's biggest thing is our focus, and we did a really good job with that over our entire spring break trip. I'm proud of how our team has kept energy in the dugout, kept swinging and kept battling each and every game."

The Big Ten Player of the Week added three runs scored against RV Oregon State and was 1-for-3 with a RBI and run scored at then-No. 13 UCLA. In addition, she scored nine times, drew four walks, slugged .850 and registered a .583 on-base percentage.

"That is a great honor for a great player,” said head coach Carol Hutchins. “Michigan is very proud of Sierra Romero; she is a major component of our success."

Sophomore Carley Hoover, who was named SEC Pitcher of the Week, helped LSU to a sweep of its action last week. Appearing in three games, the right-hand hurler went 3-0 without allowing a run, surrendering just two hits and twirling a no-hitter on Sunday against Tennessee Tech.

It was great to be able to be on the mound this week for my team,” Hoover said. “We played good ball this weekend with great defense and lots of runs scored. When my team scores an insane amount of runs like they have been its easier on me to get the job done. Every time I pitch is just an opportunity to do what I can to help my team win.”

Averaging two strikeouts per innings, she struck out 26 in 13. 2 innings and held her opponents to a miniscule .047 batting average. She struck out a weekend-high 10 in a five-inning win over Liberty, nine in a 3.2 inning relief effort versus Louisiana Tech and seven in her no-hitter. The Clemson, S.C. native retired the side eight times, including a perfect inning in which she needed just three pitches to retire the side.

“Carley really helped lead our team to a great weekend on the field,” said head coach Beth Torina. “She was absolutely dominant at times and had several outstanding performances. She continues to grow every time she steps in the circle, and I’m sure this season has big things in store for her and our team.”