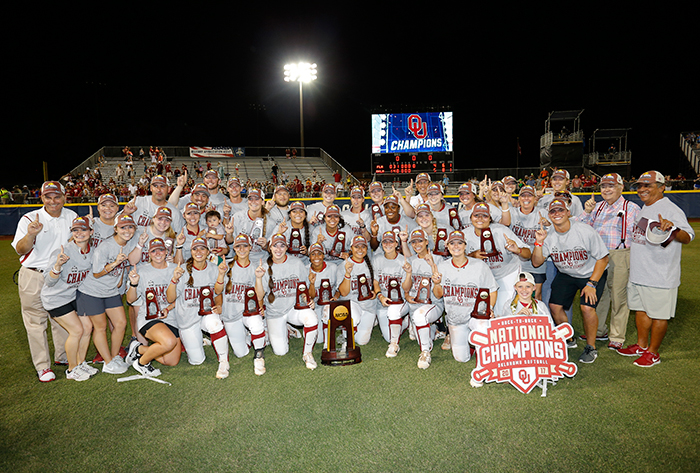 LOUISVILLE, Ky. – Coming off a second straight national title, Oklahoma is the unanimous No. 1 team in the final 2017 USA Today/NFCA Division I Top 25 Coaches Poll. Collecting all 32 first-place votes the Sooners (61-9) swept Florida in a thrilling WCWS Championship Series to earn their fourth overall title and third in five years.

OU’s run to the championship started off on the wrong foot following a regional-opening defeat to North Dakota State. That would be their last postseason loss. The 10th-seeded Sooners won four elimination games, including pair over Tulsa in the regional final, to start a run of 11 consecutive victories. In the championship series, Oklahoma outlasted Florida, 7-5, in an epic 17-inning affair, the longest WCWS game in finals history, followed by a 5-4 nailbiter in game two. Prior to the series, the Sooners knocked off No. 15 seed Baylor (6-3), No. 6 seed Washington (3-1) and No. 3 seed Oregon (4-2).

National runner-up Florida is No. 2. The Gators (58-10) blanked No. 9 seed Texas A&M (8-0) and No. 13 seed LSU (7-0), before topping Washington (5-2) to reach its third championship series in four years. UF’s run featured two wins over RV Oklahoma State, including a 5-0 triumph in the Gainesville Regional “if necessary” game. The Gators rallied from an opening loss to No. 16 seed Alabama in the Super Regionals with 2-0 and 2-1 wins over the Crimson Tide.

A pair of 48-win programs, UCLA and LSU, come in at No. 5 and 6. The Bruins (48-15) cruised through regionals with three eight-run victories over Lehigh (8-0), San Jose State (10-2) and Cal State Fullerton (9-1). They were tested in Super Regionals by No. 12 seed Ole Miss, edging the Rebels in a pair of one-run contests (8-7 in 11 inn./1-0). UCLA went 1-2 at the WCWS, picking up a win over Texas A&M. The Tigers (48-22) had to win three straight elimination games, the final to over Louisiana, to get out of the Baton Rouge Regional. Faced with similar odds at No. 4 seed Florida State in the Super Regionals, LSU bounced back from a game one defeat (1-3), to win two close games on the road (1-0, 6-4) against the Seminoles. The Tigers would open the WCWS with a win over UCLA before dropping their next two contest.

The final two WCWS participants hail from the Lone Star State as Baylor and Texas A&M are ranked No. 7 and No. 8. The Bears (48-15) survived a very tough Waco Regional thanks in large part to Gia Rodoni, who tossed a pair of no-hitters in 1-0 victories over Kent State and then-No. 11 James Madison. Following the regional sweep, Baylor faced off against No. 2 seeded Arizona in Tucson, which featured three tightly contested affairs. After a 3-2 walk-off defeat in game one, the Bears rallied from a deficit in each of the final two contests to shock the Wildcats (6-4, 6-5) and advance to the WCWS. After a three-game regional sweep, the Aggies (47-13) bounced back from a Super Regional-opening loss at No. 8 seed Tennessee with a pair of close wins over the Volunteers (6-5, 5-3). In their first WCWS appearance since 2008, Texas A&M fell to Florida and UCLA.

Super Regional participants, Tennessee, Alabama, Auburn, Utah and Ole Miss, along with Minnesota make up 11 through 16.

The 2017 USA Today/NFCA Division I Top 25 Poll is voted on by 32 NCAA Division I head coaches, one representing each conference.

The USA Today/NFCA Division I Coaches Poll is voted on by 32 NCAA Division I head coaches, one representing each conference.