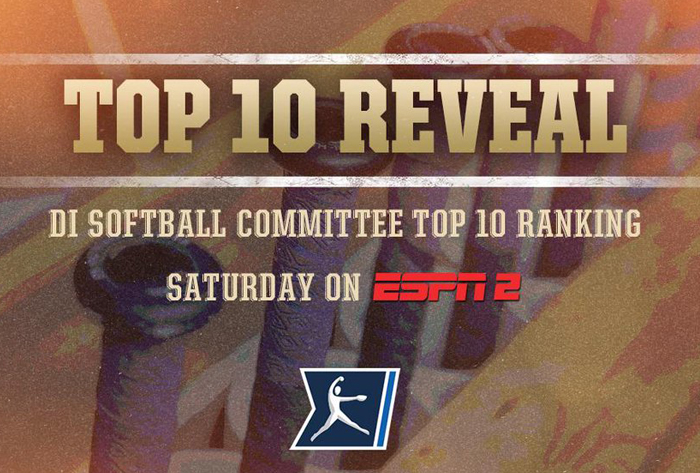 INDIANAPOLIS- The Division I Softball Committee will reveal a top ten ranking tomorrow, Saturday, April 30  at 8 p.m. ET during the Tennessee vs. Auburn softball game on ESPN2.

The committee continues to look for new ways to increase interest in the championship and believes that the early reveal of a top 10 ranking two weeks ahead of SelectionSunday will generate excitement in the softball community.  The early reveal will also provide a sneak peak for the teams vying for top seed positions in the upcoming 2016 championship.

The ranking announcement will have no bearing on the final bracket that will be revealed on Sunday, May 15, at 10 p.m. ET on ESPNU.

The ranking is based on the criteria used to select and seed the 64 teams for the Division I Softball Championship and include strength of schedule, Rating Percentage Index, head-to-head competition, results versus common opponents, significant wins and losses, and locations of contests. Additionally, input is provided by the regional advisory committees for consideration by the Division I Softball Committee.

-- Courtesy of the NCAA