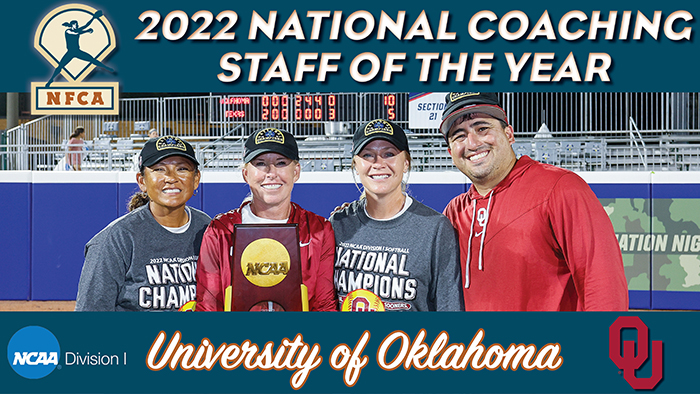 LOUISVILLE, Ky. – Back-to-back national champion Oklahoma was voted the 2022 NFCA Division I National Coaching Staff of the Year, announced the Association on Thursday afternoon. The Sooners, under the direction of head coach Patty Gasso, capped off their record-breaking campaign with the program’s sixth national title, the third most in NCAA DI history.

Gasso, along with associate head coach Jennifer Rocha, assistant coach JT Gasso and volunteer assistant Kristen Zaleski, guided OU to a 59-3 record and 2022 national championship, its fourth in the last six seasons. The Sooners registered a 10-1 record, 5-1 at the Women’s College World Series, during their dominant run through the postseason. They captured the title with 16-1 and 10-5 victories over Big 12 rival Texas in the Championship Series.

Owning the top offensive team and pitching staff in Division I, the Sooners’ historic season included 41 run-rule victories, 33 shutouts, eight no-hitters and home runs in 56 of 62 games, to go along with holding the opposition to one run or fewer 49 times. OU went wire-to-wire as the No. 1 team in the USA Today/NFCA DI Top 25 Coaches Poll and was unanimous in all but one week. They finished the season ranked first in home runs, batting average, slugging, on-base percentage and runs per game, while the pitching staff boasted the lowest ERA and most shutouts. Additionally, the Sooners started 2022 38-0, the best start to a season in Division I history.

Gasso, who just completed her 28th season at the helm of the Sooners and 32nd overall as a head coach, reached the 1,500 career-win milestone with a 9-0 victory over Mississippi State on Feb. 11. The NFCA Hall of Famer finished 2022 with 1,556 career victories, 1,395 during her time in Norman.

The National Coaching Staff of the Year award is voted on by NCAA DI member head coaches. Gasso and her staff will be honored at the NFCA Awards Brunch, Dec. 10 at the 2022 NFCA Convention in San Antonio.