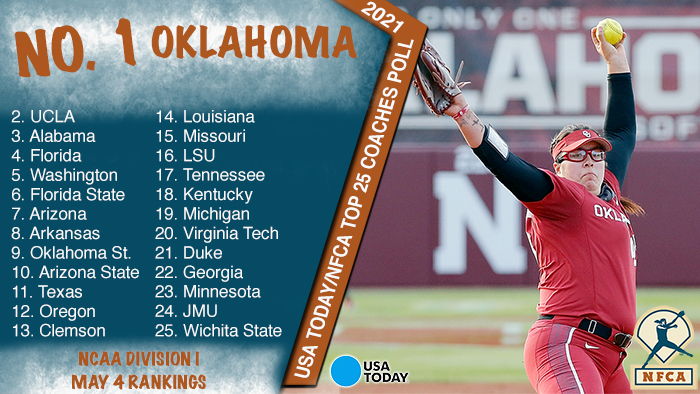 LOUISVILLE, Ky. – Oklahoma is the top-ranked team for the tenth straight week, eighth unanimously, in the 2021 USA Today/NFCA Division I Top 25 Coaches Poll. The Sooners swept a Big 12 doubleheader from Baylor in Waco, Texas to improve to 39-1 on the season.

UCLA was selected unanimously No. 2 for the second straight week after a four-game Pac-12 sweep of Utah on the road, which included a pair of shutouts. Alabama hurdled Florida for the No. 3 ranking, while fifth-ranked and idle Washington (35-9) and sixth-ranked Florida State remained in their spots.

The Crimson Tide (39-7) posted three road wins in Southeastern Conference (SEC) play against then-No. 21 Georgia, while the Gators (37-8) took two-of-three on the road from No. 15 Missouri (35-13) in another pivotal SEC series. The Seminoles (36-8-1) captured three-of-four in an Atlantic Coast Conference series versus North Carolina State.

Coming off their win at Oklahoma State and three road victories at Tulsa, the Shockers (37-10-1) returned to the top 25.

Heading into this week’s slate of contests, the top-ranked Sooners have a pair of top-25 matchups. Following a non-conference tilt tonight, May 4, against Wichita State, top-ranked OU heads over to Stillwater for Bedlam this weekend with the Big 12 regular season on the line against Oklahoma State. The Sooners (14-0) hold a half-game lead over the Cowgirls (14-1).

The 2021 USA Today/NFCA Division I Top 25 Poll is voted on by 32 NCAA Division I head coaches, one representing each conference. Records reflect games played through May 2. Programs not competing in 2021 will not be eligible for ranking consideration.

The 2021 USA Today / NFCA Division I Top 25 Coaches Poll is voted on by 32 NCAA Division I head coaches with one representing each of the NCAA’s Division I Conferences. Records reflect games played through May 2.

*Programs not competing in 2021 will not be eligible for ranking consideration.