Oklahoma advances to WCWS semifinals with 7-5 victory over Michigan 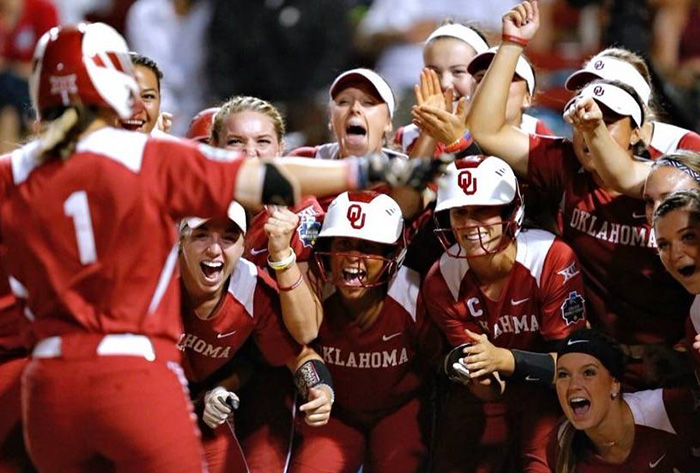 OKLAHOMA CITY – Oklahoma held on for a 7-5 over Michigan to extend its winning streak to 29 games and advances to the semifinals of the Women’s College World Series on Saturday evening at ASA Hall of Fame Stadium.

Oklahoma put a three-spot on the board in the top of the first. Shay Knighten laced a two-run single back up the middle and later scored the third run when a throw on a stolen base hit the runner and rolled away from the defenders.

Sydney Romero crushed a leadoff homer to left for a 4-0 OU lead in third. She finished the contest 2-for-3 with a RBI and two runs scored. Knighten also recorded two hits and added two RBI and a run.

The Wolverines cut their deficit to 4-3 with a three-run fourth. Aidan Falk put Michigan on the board with a two-run homer just inside the right field foul pole. Michigan loaded the bases with two outs and Sierra Romero narrowly beat the throw on a dribbler to third for the final run of the inning. Paige Parker avoided further damage with a called third strike to end the frame.

Falk finished 3-for-3 with a homer, three RBI and a run scored.

Nicole Pendley notched the second leadoff homer for the Sooners in the top of the sixth for a 5-3 advantage.

Oklahoma added a pair of insurance runs for a 7-3 lead in the top of the seventh on a bases loaded walk by Fale Aviu and a two-out infield single off the bat of Kady Self.

Those two runs proved to be important as the Wolverines plated two in the bottom half of the frame to get within 7-5 and had the bases loaded, but Parker induced a comebacker to end the rally and secure the win.

Parker improved to 35-3 with a complete-game effort in which she scattered 12 hits, struck out eight and walked three.

Michigan’s Megan Betsa fell to 28-4 on the season as she surrendered seen runs, five earned on six hits with seven punchouts and six walks in 6.1 innings.

The Wolverines out hit the Sooners, 12-7 as every batter in the lineup recorded at lead one hit. Along with Falk, Sierra Lawrence was the only other multi-hit Wolverine with a 2-for-4 outing. OU drew six walks and swiped five bases.