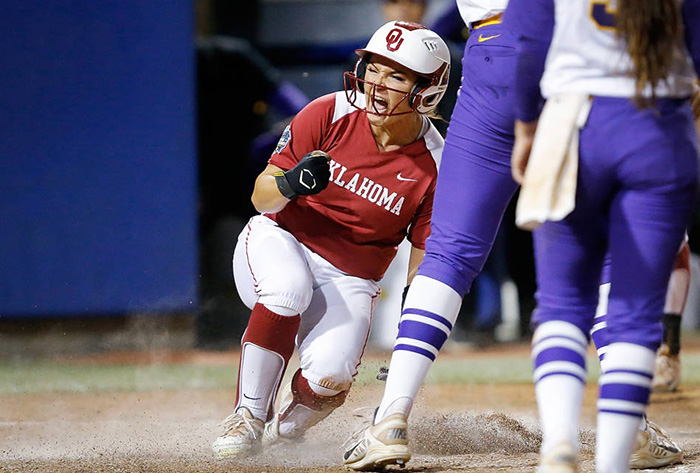 OKLAHOMA CITY – Oklahoma won its 30th straight games as it topped LSU, 7-3 in the second semifinal of the 2016 Women’s College World Series on Sunday evening and earned a spot in the Championship Series.

The Sooners (55-7) return to the series for the first time since 2013 when they won the title and will be looking for their third overall. OU will take on Auburn in game one, tomorrow June 6 at 7:00 CT.

A half inning after LSU tied the contest in the bottom of the third on a Sahvanna Jaquish three-run home run, the Sooners reclaimed the lead for good with three runs of their own. With one out, Erin Miller knocked one back up the middle for a two-run single, which proved to be the game-winning hit. She would later score the third run of the frame on a wild pitch for a 6-3 OU lead.

A solo blast to left by Shay Knighten in the sixth made the final margin 7-3.

Paige Parker (36-3) scattered eight hits in the complete-game effort for the Sooners. She worked in and out of some trouble most of the night, and outside of Jaquish’s long ball, Parker battled and survived a few sticky situations. The southpaw struck out four and walked two

Kady Self put the Sooners up 1-0 in the second with a RBI single. An inning later, an error and a Knighten run-scoring single pushed the lead to 3-0. She finished 2-for-4 with two RBI.

The advantage did not last long as Sahvanna Jaquish evened the contest as she lined a three-run homer into the left centerfield seats.

LSU’s Sandra Simmons led all hitters on the evening, going 3-for-3 with a run scored. Miller was 2-for-5 with a two RBI and Kelsey Arnold finished 2-for-2 with a run.