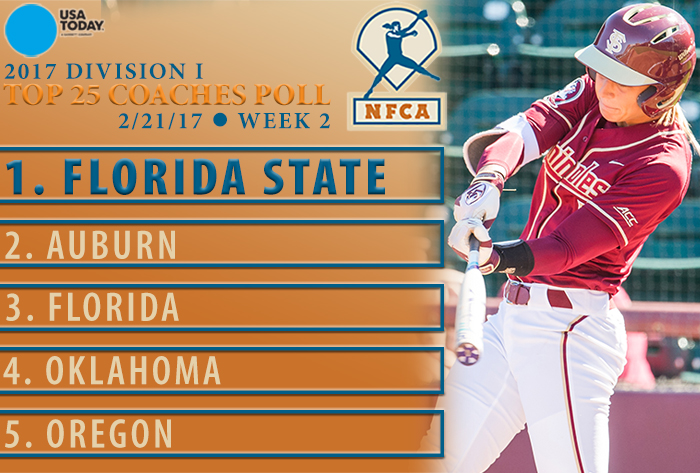 LOUISVILLE, Ky. – For the first time in program history, Florida State is the No. 1 team in the USA Today/NFCA Division I Coaches Poll, announced the Association on Tuesday morning. The Seminoles (10-0), off to their best start since 2012, garnered 18 first-place votes and 776 points leapfrogged Auburn, who received 10 first-place votes and 762 points.

Since the poll’s inception in 1995, Florida State reached as high as No. 2 in 2004, a spot it held for four weeks during regular season. Last week, the Seminoles won five contests, four via a shutout. Playing in the friendly confines of JoAnne Graf Field, FSU blanked Florida A&M (5-0) before sweeping through the ACC/Big Ten Challenge. After edging Northwestern, 3-2, Florida State did not allow a run the rest of the weekend, shutting out the Huskies (7-0) and Nebraska (9-0 / 8-0)

The second-ranked Tigers (9-1), won all six of their contests. Following a 4-3 eight-inning victory over SIUE in their home opener, Auburn outscored its opposition 39-5 at its annual Plainsman Invitational.

Jumping four spots to No. 5 is Oregon, who went 3-0 at the rain-shortened Mary Nutter Collegiate Classic, including a win over No. 22 Kentucky, which saw the Ducks (9-0) rally from a 4-1 deficit in the final two innings.

UCLA, LSU and Washington remained at No. 6, 7 and 8. The Bruins (10-1) split with No. 22 Kentucky (6-2, 1-2 in 11 inn.) and went 4-0 at the Mary Nutter. The Tigers (9-1) swept through their competition at Tiger Park, including a 4-0 mark during the Purple & Gold Challenge. The Huskies (7-1) weather-shortened week included three wins at the Campbell Cartier Classic and a mid-week victory over Long Beach State.

Arizona improved to 11-0 after a perfect 6-0 outing at its Wildcat Invitational and moved up a spot to No. 9 in the poll. Outside of a 2-1 win over North Dakota State, the Wildcats cruised to their other five wins, outscoring the opposition, 54-3, including a 21-0 victory over Drake.

Rounding out the top 10 is Alabama, who fell five positions after dropping two-of-three at then-No. 18 Louisiana. The Crimson Tide won the opener 3-0, but dropped the final two games of the series at Lamson Park, 11-2 and 7-0.  Alabama opened the week with a home win over RV South Alabama, 3-1.

The USA Today/NFCA Division I Top 25 Poll is voted on by 32 NCAA Division I head coaches, one representing each conference.  Records reflect games played through Feb. 19.

Dropped Out: No. 21 Fresno State

The USA Today/NFCA Division I Coaches Poll is voted on by 32 NCAA Division I head coaches, one representing each conference.