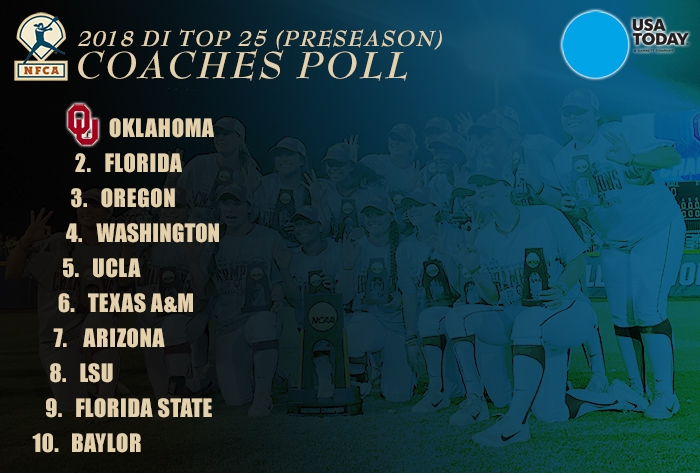 LOUISVILLE, Ky. – Oklahoma, coming off a 2017 national title, is the preseason favorite in the 2018 USA Today/NFCA Division I Top 25 Coaches Poll. The two-time defending champs collected 31 of a possible 32 first-place votes and 799 points.

The Sooners (61-9) swept preseason No. 2 Florida in a thrilling WCWS Championship Series to earn their third title in five years and fourth overall. OU’s run to the championship started off on the wrong foot following a regional-opening defeat to North Dakota State. That would be its last postseason loss. The 10th-seeded Sooners won four elimination games, including pair over Tulsa in the regional final, to start a run of 11 consecutive victories. In the championship series, Oklahoma outlasted Florida, 7-5, in an epic 17-inning opener, the longest WCWS game in finals history, followed by a 5-4 nailbiter in game two.

The national runner-up Gators (58-10) earned the other first-place vote and 762 points. Florida blanked No. 9 seed Texas A&M (8-0) and No. 13 seed LSU (7-0), before topping Washington (5-2) to reach its third championship series in four years. UF’s run featured two wins over Oklahoma State, including a 5-0 triumph in the Gainesville Regional’s “if necessary” game. The Gators rallied from an opening loss to No. 16 seed Alabama in the Super Regionals with 2-0 and 2-1 wins over the Crimson Tide and went 3-0 in round-robin play at the WCWS.

The Aggies (47-13) swept through regionals and claimed a tough three-game Super Regional in Knoxville. Following opening loss at No. 8 seed Tennessee, Texas A&M earned a pair of close wins over the Volunteers (6-5, 5-3) to advance to their first WCWS since 2008.

Arizona enters the preseason at No. 7. The Wildcats (52-9) rolled through the Tucson Regional before falling to Baylor in a tight-knit Super Regional. The LSU Tigers follow Arizona at No. 8. LSU (48-22) had to win three straight elimination games, the final two over Louisiana, to get out of the Baton Rouge Regional. Faced with similar odds at No. 4 seed Florida State in the Super Regionals, LSU bounced back from a game one defeat (1-3), to win two close games on the road (1-0, 6-4) against the Seminoles. The Tigers would open the WCWS with a win over UCLA before dropping their next two contests.

Florida State and WCWS participant Baylor round out the top 10. The Seminoles (55-8) swept through regional before being upended by LSU at home in the supers. The Bears (48-15) survived a very tough Waco Regional behind a pair of Gia Rodoni no-hitters in 1-0 triumphs over Kent State and preseason No. 21 James Madison. Baylor rebounded from a 3-2 defeat to top the host Arizona (6-4, 6-5) to advance to the WCWS.

The Pac-12 littered the poll with four programs in the top-10 and six overall. The Southeastern Conference led the way with nine in the preseason rankings, including three in the top 10. The Big 12 was represented by three institutions, two in the top-10. No. 24 Oklahoma State is the only unranked team from last year’s final poll in the preseason Top 25.

The 2018 USA Today/NFCA Division I Top 25 Poll is voted on by 32 NCAA Division I head coaches, one representing each conference. The first regular season poll will be published on Feb. 13.