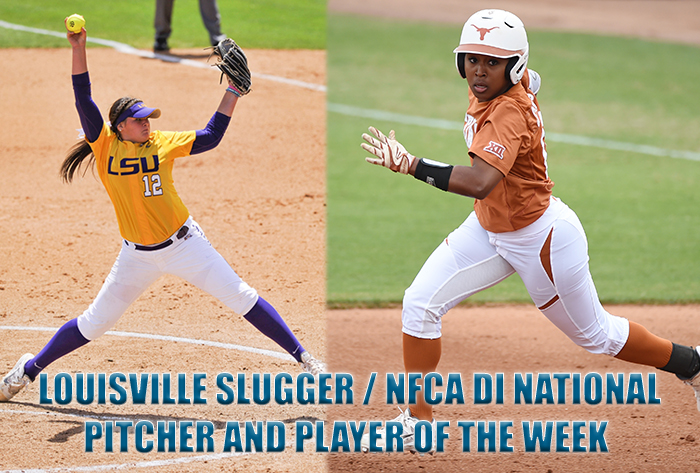 LOUISVILLE, Ky. – Texas’ Lindsey Stephens and LSU’s Sydney Smith were named Louisville Slugger / NFCA Division I National Player and Pitcher of the Week, respectively, announced the Association on Tuesday afternoon. The duo snagged the final weekly awards of the 2016 season.

Stephens had an outstanding week at the plate for the Longhorns. The senior outfielder hit. 571, launched four home runs and scored 11 times. She also registered two doubles and seven RBI, while slugging 1.571 and owning a staggering 2.218 OPS.

“Being named the NFCA National Player of the Week is very exciting for me personally, considering the extraordinary level of softball athletes throughout the country,” Stephens said. “To be considered one of the best players in the nation at any time is a tremendous honor. This award belongs not just to me, but also my teammates here at Texas. I couldn’t have any individual success without their support each and every time we take the field.”

The Beaumont, Texas native hit safely in all four contests and homered in all three Big 12 games against Iowa State, which included two long balls, four RBI and three runs scored in the middle game of the series. She left Ames, Iowa with a .583 average for the series with nine runs, two doubles, four dingers and seven RBI. Stephens crossed the dish three times in each contest and also doubled and homered in games one and three.

“Obviously, this is a great honor for both Lindsey and the Texas softball program,” head coach Connie Clark said. “She is one of our team captains and takes the job of leading us both on and off the field very seriously. I am so happy for her to receive this award from the NFCA and look for Lindsey to continue her strong contributions throughout the remainder of the regular season and as we head into the NCAA Tournament. We are all so proud to have Lindsey as a part of the Longhorns program.”

Smith stymied one of the top offensive programs in the country, earning both wins in the circle against a ranked Washington team that owned the eighth-highest batting average in the nation. She held the potent Huskies to just a single run on 11 hits in 13.2 innings of work.

"It's such an honor to receive this award, and none of it could have been done without my teammates behind me," Smith said. "We played well in all phases last week and it just shows that all 23 players on this team matter and contribute to us being successful both as individuals and as a group."

In the series opener, Smith twirled a three-hit shutout, her seventh of the year, with four strikeouts. The Maple Grove, Minn. native’s stellar outing handed Washington its first shutout of the season. She came out of the bullpen in the finale and tossed the final 6.2 frames, allowing a run and scattering eight hits to allow No. 12 LSU to rally and eventually pull out a 5-4 win in nine innings.

"Sydney's thrown so well for such a long period of time for us, so it's really nice to see it all come together for her," LSU head coach Beth Torina said. "She's worked really hard and has soaked up all the knowledge she can, leading her to be someone we know we can count on down the stretch."