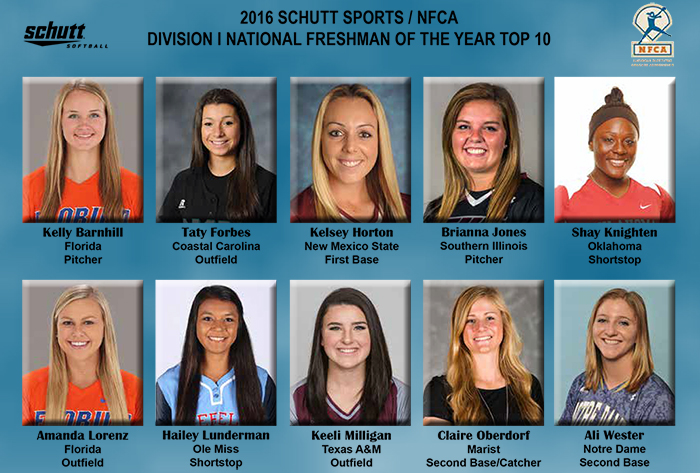 LOUISVILLE, Ky. – Ten finalists have been selected for the 2016 Schutt Sports / NFCA Division I National Freshman of the Year award, announced the Association on Thursday afternoon. The award will be presented to the winner prior to the 2016 NCAA Women’s College World Series in Oklahoma City, Okla.

The top three finalists will be voted on and released on Wed., May 25. The Schutt Sports / NFCA Division I National Freshman of the Year trophy will be presented during a live ceremony on May 31 at the WCWS banquet.

With the Association always searching for innovative ways to promote the sport of softball, the award was created in 2014 from an idea to honor outstanding athletic achievement among freshmen softball student-athletes throughout Division I. In the inaugural year, Auburn’s Kasey Cooper and Tennessee’s Annie Aldrete, were co-winners. Oklahoma’s Paige Parker took home the honor in 2015.

NFCA Division I National Freshman of the Year Finalists