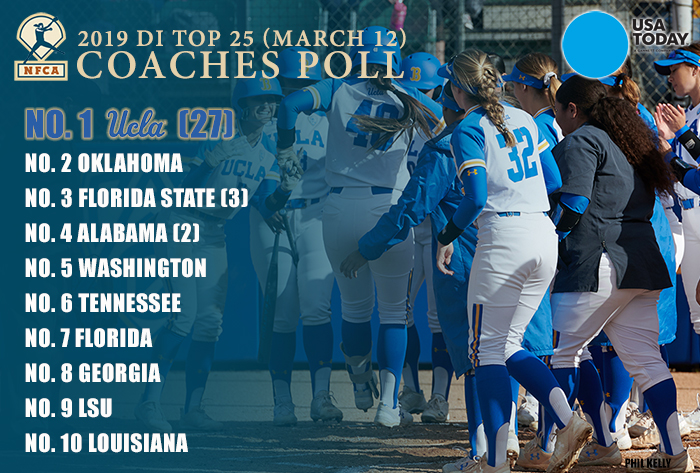 UCLA enjoyed a 5-0 week co-hosting the UCLA/Long Beach Invitational. The Bruins opened with three home wins over Robert Morris (11-0), BYU (8-2) and Liberty (4-3). On the final day, they toped Boston University, 12-0 and co-host Long Beach State, 5-3 in eight innings. UCLA hits the road for the opening weekend of Pac-12 play, taking on No. 5 Washington in Seattle.

Oklahoma shifted up a spot to No. 2 this week. The Sooners (20-2) extended their winning streak to 10 games with five home triumphs, including two over RV Northwestern and one over RV Drake.

The Seminoles (25-2) slipped to No. 3 after suffering their first two losses of 2019. The defending champs split a doubleheader at Grand Canyon, dropping the opener, 5-3 before rebounding with an 11-1 victory. In a three-game series at No. 12 Arizona, FSU took games one and three from the Wildcats, 5-3 and 4-3.

The lone undefeated team in the top 25, Alabama, moved up another position to No. 4 winning all five games at home. The Crimson Tide (25-0) knocked South Alabama and Mississippi Valley State before sweeping Missouri in their opening SEC series.

Washington returned to No. 5 as it blanked the opposition over a six-game stretch last week. Husky pitchers did not allow a single run in 39 innings of work and extended their shutout streak to seven games. Washington (22-3) kept RV Ohio State, North Illinois twice, Idaho State twice and Seattle off the scoreboard.

Tennessee also shifted up one spot to No. 6 after taking two-of-three from then-No. 4 Florida in Gainesville. The Lady Vols (18-3) captured the first two contests, 9-1 and 3-0 before the Gators (22-4) picked up a win the SEC series finale. With the two defeats, UF fell to No. 7 this week.

Georgia remained at No. 8 following a 5-1 week. The Bulldogs (23-3) thumped Georgia Tech, 16-4, on the road before returning home for the UGA Classic. Georgia defeated Bowling Green twice, Elon and Western Illinois, but did drop one to the Phoenix.

No. 24 Boise State is the only newcomer this week. One of the hottest teams in the country, the Broncos (18-2) have won a program-record 17 straight and enter the NFCA’s top 25 for the first time in their history. Boise State knocked off Sacramento State twice, host Pacific, and Fairleigh Dickinson at the Louisville Slugger Tournament in Stockton, Calif.

The 2019 USA Today/NFCA Division I Top 25 Poll is voted on by 32 NCAA Division I head coaches, one representing each conference. The records reflect games played through March 10, 2019.

The 2019 USA Today / NFCA Division I Top 25 Coaches Poll is voted on by 32 NCAA Division I head coaches with one representing each of the NCAA’s Division I Conferences. Record reflect games played through March 10, 2019.