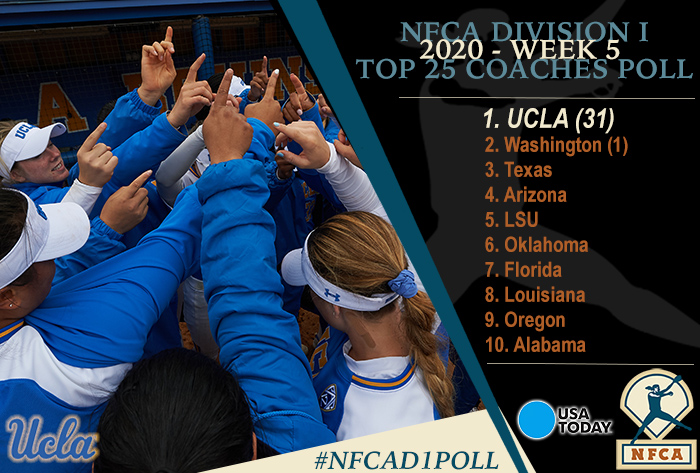 LOUISVILLE, Ky. – UCLA continued its hold on No. 1 as there were no significant changes in the 2020USA Today/NFCA Division I Top 25 Coaches Poll. The Bruins (25-1) captured 31 of 32 possible first-place votes.

With no major movement, the top eight remained the same with a combined record of 34-1 last week. Oregon makes its return to the top 10 at No. 9, while Alabama slipped one spot to No. 10. The Ducks (21-2) won their first home games of the season, knocking off then-RV Loyola Marymount, Seattle twice and Portland.

There were no new programs in the top 25. No. 21 Mississippi State and No. 24 Baylor made the biggest jump and fall, switching spots in the rankings.

The 2020 USA Today/NFCA Division I Top 25 Poll is voted on by 32 NCAA Division I head coaches, one representing each conference. Records reflect games played through March 8 with first-place votes in parentheses.

The 2020 USA Today / NFCA Division I Top 25 Coaches Poll is voted on by 32 NCAA Division I head coaches with one representing each of the NCAA’s Division I Conferences. Records reflect games played through March 8.