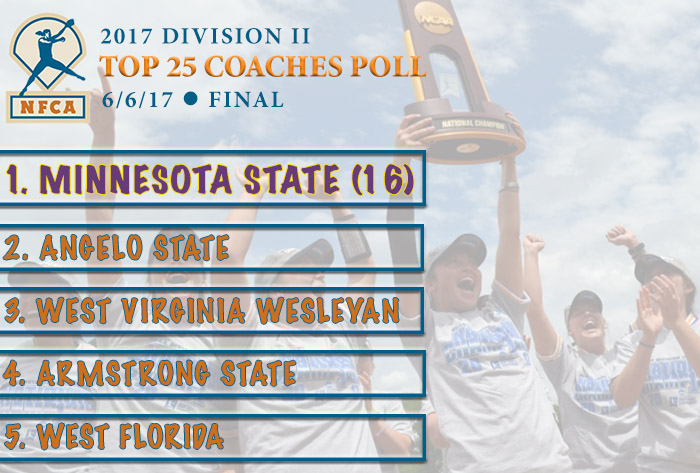 In route to its first championship, Minnesota State went 10-1 in the postseason and set a program record for wins. The Mavericks swept through regionals before earning a hard-fought Central Region title on the road at top-seeded Harding. The highly competitive Super Regional featured three one-run contests with the Mavericks winning games one (1-0 in 10 inn.) and three (7-6). As the No. 2 overall seed, Minnesota State was a perfect 5-0 in Salem, Va., including a pair of 5-1 triumphs over Angelo State.

National runner-up Angelo State comes in at No. 2. The Rambelles (60-7), who were ranked No. 1 in the NFCA poll for seven weeks, including the final five of the regular season, garnered the top seed in the South Central Region and overall at the National Championships. They won their first eight postseason games, sweeping through regionals and supers and knocking off Humboldt State, West Virginia Wesleyan and Armstrong State before taking on Minnesota State in the championship series.

Semifinalists West Virginia Wesleyan and Armstrong State finish the season at No. 3 and No. 4, respectively. The Bobcats (51-10) put in a strong showing in their first National Championships’ appearance going 2-2. They posted a pair of shutout wins over Molloy (4-0) and West Florida (1-0) and dropped games to the finalists Angelo State (6-5 in 12 inn.) and Minnesota State (5-2). On its way to Salem, WVWC swept through regionals and topped Atlantic Region No. 1 seed West Chester in games one (3-2) and three (10-1).

The Pirates (38-14) made the most of their last season as an athletic program, making their second straight national semifinals appearance. Coming out of the Southeast as the No. 3 seed, Armstrong State went 8-3 in the postseason. Hosting the Southeast Regional No. 2, the Pirates dropped their opening game to Young Harris. They bounced back to win four straight elimination games and seven straight postseason contests, including a two-game Super Regional sweep at Southeast No. 1 North Georgia. They won their final contest on campus, a 10-1 regional clinching victory over Pfeiffer, with the last athletic play on campus being a game-ending grand slam off the bat of Macy Coleman.

West Florida, Humboldt State, Southern Indiana and Molloy are the No. 5-8 ranked programs. The Argonauts (46-15), swept through regionals and supers as the South Region’s No. 1 seed. Registering a 6-2 mark in the postseason, West Florida finished the season with 46 victories, the most since 2005 The Jacks (44-15) returned to the National Championships stage for the second straight season. They swept through regionals and super regionals as the West’s No. 2 seed and finished with a 6-2 postseason mark.

The Screaming Eagles (46-14), under the direction of Sue Kunkle, earned their program’s first trip to the National Championships. As the Midwest Region’s No. 2 seed, also swept through the regional and super regional stages and finished 5-2 in the post season. Molloy made its third appearance at the National Championships after sweeping the East’s top seed, Adelphi on the road in supers. The Lions (37-18), who are in the top-25 for the first time this season, also won all three of their regional contests.

Joining Molloy as first-time top-25 teams in 2017 are No. 15 Lee and No. 25 Shepherd. The Flames (36-20) reached the South Super Regionals, while the Rams were an Atlantic Regional finalist, forcing an “if necessary” game with West Chester.

The NFCA Division II Top 25 Poll is voted on by 16 NCAA Division II head coaches with two representing each of the eight NCAA regions. Records reflect games played through Monday, May 29.

The NFCA Division II Top 25 Poll is voted on by 16 NCAA Division II head coaches with two representing each of the eight NCAA regions. Records reflect games played through Monday, May 29.