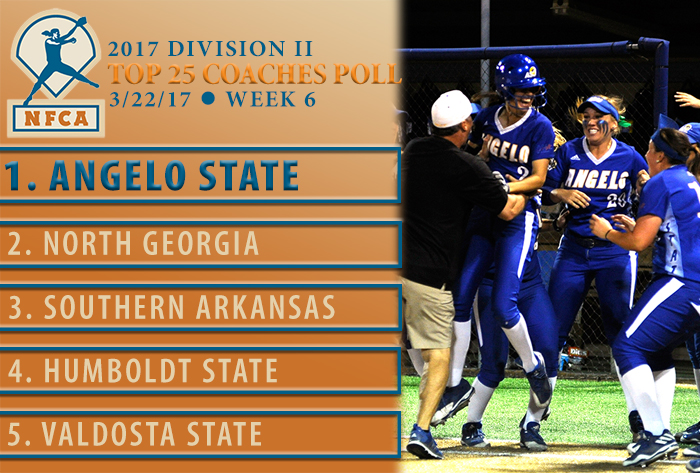 LOUISVILLE, Ky. – Angelo State continued its rise and finally reached the top spot in this week’s NFCA Division II Top 25 Coaches Poll. The Rambelles (30-2), who received 14 first-place votes and 398 points, climbed to No. 1 for the first time since the 2012 season.

Angelo State enjoyed a program 26-game winning streak during its ascension to No. 1. Behind strong pitching and timely hitting, the Rambelles opened last week with four close shutout victories, beginning with two over Oklahoma Christian (2-0, 3-0). In Lone Star Conference play Angelo’s Brandy Marlett and Kenedy Urbany shut down the high-octane offense of No. 12 West Texas A&M in a pair of 1-0 wins, before falling in the series finale to the Lady Buffs, 3-0, in eight innings.

Shifting up one spot each was No. 2 North Georgia and No. 3 Southern Arkansas as previous No. 1 Humboldt State fell to No. 4. The Nighthawks (27-7) rebounded from a week-opening Peach Belt Conference loss at Flagler to post five straight league road victories. The Lady Muleriders (25-3) swept through Great American Conference play, closing out its series with a pair of wins over Southern Nazarene before claiming all four on the road at Southwestern Oklahoma State.

The Jacks (21-4), who still garnered two first-place votes, fell from No. 1 since taking over the spot in the first regular season poll. HSU dropped three-of-four at Cal State San Bernardino, salvaging a win in the final game of the California Collegiate Athletic Association series.

Joining the poll this week is No. 21 Southern New Hampshire, No. 23 Minnesota State and No. 24 Colorado Mesa, while Missouri Western, Caldwell and Shorter fell out.

The NFCA Division II Top 25 Poll is voted on by 16 NCAA Division II head coaches with two representing each of the eight NCAA regions. Records reflect games played through