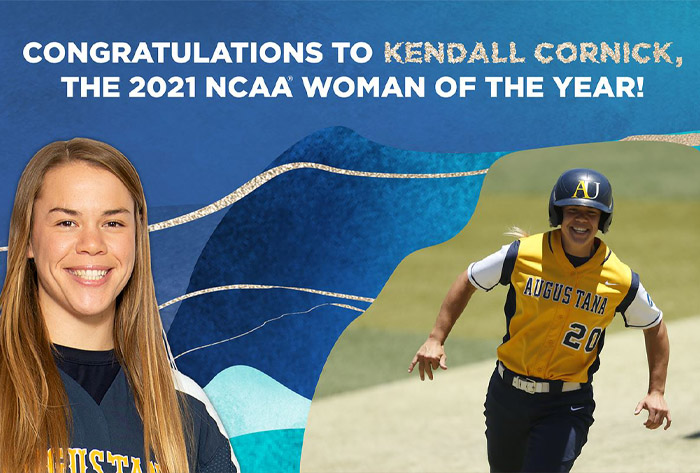 Indianapolis - Kendall Cornick, an All-America softball player at Augustana (South Dakota) where she majored in biology and psychology, is the 2021 NCAA Woman of the Year. She was announced as the winner Tuesday night during a streamed awards show celebrating the Top 30 honorees.

The Woman of the Year Award, created in 1991, recognizes graduating female student-athletes who have distinguished themselves in athletics, academics, leadership and community service. Cornick is the first Augustana student-athlete and second from Division II to receive the award in its 31-year history.

"This recognition is a fitting culmination of Kendall Cornick's outstanding career as a student-athlete at Augustana University. She demonstrated excellence in the classroom, in competition and in service to her community. Kendall's deep commitment to her team and her true love of the game made her an amazing leader and role model, both on and off the field. She has given us much to celebrate and we know there is much more ahead for this humble servant leader. The university is so proud of her and we will continue to cheer for her in the innings ahead," said Augustana President Stephanie Herseth Sandlin.

Cornick said the award is a testament to "every woman and mentor that came in my life before this moment." She said these influences ranged from her mother to the many teachers and professors who have touched her life, as well as leaders in athletics like Augustana softball head coach Gretta Melsted.

"I have learned from those mentors that I can do anything," she said, before focusing on Melsted's impact. "She makes it a mission for players to leave the program better than we came into it. She is just phenomenal in that aspect and really wants us to be strong female leaders but more than just in softball. She wants us to go change the world."

"There are many life lessons in softball that I've learned and come to trust in. I think the biggest one for me was adapting my mindset from being goal oriented to process oriented," Cornick said. "Another lesson was how empowered women can keep empowering more women. My coach always said this to us: Empowered women empower women. My role as a now-empowered woman is to keep providing newer generations of females that mentorship and that leadership to become strong and independent and accomplish great things."

Cornick's accomplishments off the diamond align with what she achieved on it. At Augustana, her academic work included analyzing drug targets for medulloblastoma, a common form of childhood brain cancer, as a student research fellow. Currently a medical school student at Iowa, she graduated from Augustana with a 3.94 GPA and received several honors tied to her academic success. These included the 2020-21 D2 CCA Scholar-Athlete of the Year Award, the NSIC Willis R. Kelly Scholar-Athlete Award and the 2021 CoSIDA DII Academic All-America Team Member of the Year for softball. She was also a 2021 NCAA Postgraduate Scholarship recipient.

"My experiences as a softball player were extremely important and a huge contributing factor to my success as a student," Cornick said. "Through softball, especially when you lift, practice, you have other outside team things, you really get good at time management. I learned quickly that when you have a to-do list, when you're scheduled out, you're on top of your time, you really can do a lot of things. That really helped with school and figuring out how to accomplish my workload."

Cornick's workload included community service. She served as director of community outreach for Augustana's Kidney Disease Screening and Awareness Program, providing free kidney health screenings. She was a surgical services volunteer and pediatric companion at Sanford Hospital, as well as a surgical assistant at Avera McKennan Hospital. She also was a presenter for the National Alliance on Mental Illness, which aims to raise awareness and promote dialogue surrounding mental health challenges in schools, homes and the community.

"I am very passionate about community service, getting into my community and serving the people I live with and around because I have seen so many different experiences in my walk of life where the resources and treatments other people have received are different than what I have received," she said. "I want to continue to be involved in community service and being involved in my community to keep breaking down those barriers."