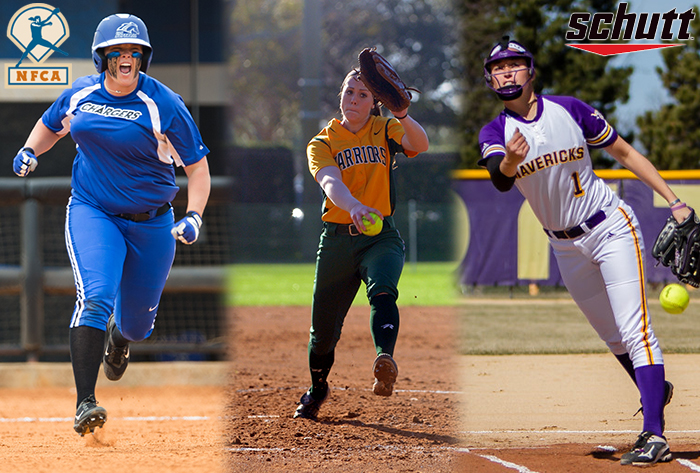 LOUISVILLE, Ky. – Seniors Kaitlyn Bannister of University of Alabama in Huntsville and Coley Ries of Minnesota State, along with graduate student Lyndsay Butler of Wayne State University were named the Top-3 finalists for the 2017 Schutt Sports/NFCA Division II National Player of the Year award.

Butler, the award’s 2016 winner, is joined by first-time finalists in Bannister and Ries. The 2017 Schutt Sports/NFCA Division II National Player of the Year will be revealed on Wednesday, May 24 at the NCAA Division II Championship Banquet in Salem, Va.

Bannister, who was a top-10 finalist for the award last year, is the two-time Gulf South Conference Player of the Year and has been selected to an NFCA All-Region team the last three seasons. She currently ranks in Division II’s top 10 in several offensive categories, including a NCAA-best 71 RBI. The third baseman finished the season with a single-season UAH record .482 batting average, while collecting 18 doubles and 21 home runs. Bannister slugged .906 and drew 30 walks, which attributed to her .545 on-base percentage.

Helping Wayne State to 2017 NCAA Super Regional appearance, Butler was the Great Lakes Intercollegiate Athletic Conference Player of the Year for the second straight season. She is currently hitting .450 with 10 doubles, five triples, seven long balls and 39 RBI. A dual threat for the Warriors, Butler, a two-time NFCA All-American, is 24-9 in the circle with four saves, a NCAA Division II-low 0.61 ERA, 15 shutouts (t-3rd) and 206 strikeouts. Earlier this season, Butler became the program’s strikeout queen, surpassing the 1,000-strikeout milestone.

Ries is putting forth one of the more dominating pitching performances in NCAA Division II this season. The right-handed hurler has amassed a NCAA-best 403 strikeouts and 34 wins (tie), along with allowing the fewest hits per seven innings amongst DII pitchers (3.42). Additionally, Ries’ 12 strikeouts per seven innings ranks second in the NCAA, while her 0.89 ERA is third and 15 shutouts is tied with Butler for third. The Northern Sun Intercollegiate Conference Pitcher of the Year has held her opponents to a .143 batting average and is the programs all-time leader with 114 wins and 1,408 strikeouts.

The award was created in 2015 to honor the outstanding athletic achievement among softball student-athletes throughout Division II. North Georgia’s Courtney Poole was the inaugural winner, followed by Butler last year.