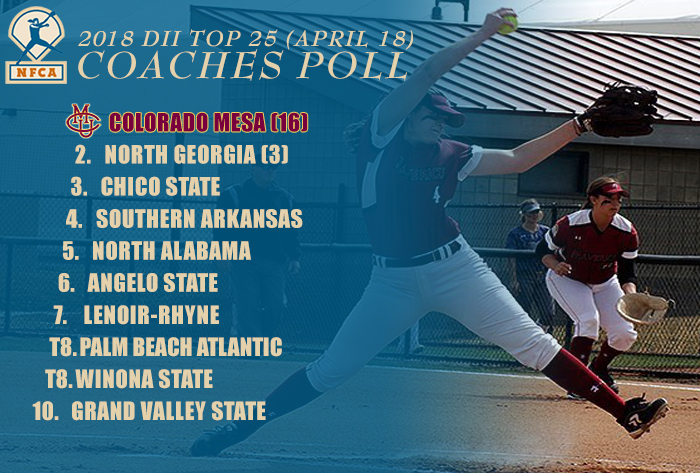 LOUISVILLE, Ky. – Despite suffering its first defeat of the season, Colorado Mesa enters its seventh consecutive week as the No. 1 team in the NFCA Division II Top 25 Coaches Poll. The Mavericks (37-1) had their program-record 37-game winning streak snapped in the final game of the Rocky Mountain Athletic Conference series finale against Regis.

CMU received 13 first-place votes and 397 votes. The Mavericks took the first three games against the Rangers (7-1, 10-2, 4-1) before being held to their lowest run total of the season in a 4-1 defeat.

No. 2 North Georgia and No. 3 Chico State continued their winning ways with 4-0 weeks. The NightHawks (47-2) swept a non-conference doubleheader from then-RV University of Alabama in Huntsville (6-1, 2-1) and a Peach Belt twinbill at Georgia Southwestern (7-0, 13-5). They received three first-place votes (387) and have won 24 of their last 25 contests. The Wildcats (39-3), winners of 14 straight, came off a bye week and took all four California Collegiate Athletic Association games from then-No. 18 Sonoma State.

Southern Arkansas (38-4) moved up one position to No. 4 collecting six Great American Conference victories, including a four-game series sweep of then-RV Harding. In at No. 5 is North Alabama. The Lions (35-4), who have won 12 straight, had a light week due to weather, defeating Christian Brothers, 12-0.

Angelo State and Lenoir-Rhyne move into the No. 6 and No. 7 spots. The Rambelles (36-6) and Bears (40-5) enjoyed undefeated weeks in league play. ASU swept UT Permian Basin, while Lenoir-Rhyne triumphed in doubleheader sweeps of then-No. 23 Queens (N.C.) and Carson-Newman. The Bears have won 14 in-a-row and 30-of-their last 31.

The 2018 NFCA Division II Top 25 Poll is voted on by 16 NCAA Division II head coaches with two representing each of the eight NCAA regions. Records reflect games played through April 15, 2018.