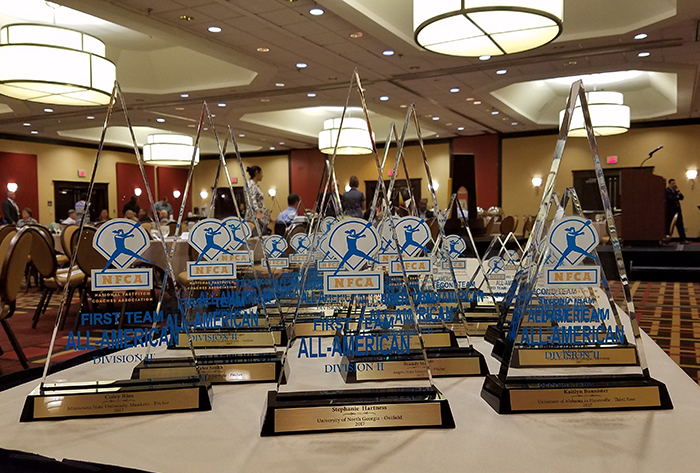 LOUISVILLE, Ky. – Fifty-one student-athletes from 37 different institutions have been chosen to one of three 2017 NFCA Division II All-American teams, the Association announced at the NCAA Division II Championship banquet on Wednesday evening at the Sheraton Airport in Roanoke, Va. In addition to the All-Americans, the Diamond Sports Catcher of the Year and New Balance/NFCA Golden Shoe awards were announced.

Five of the eight programs that advanced to the NCAA Division II Championship, held May 25-29 at the Moyer Sports Complex in Salem, Va., had student-athletes earn All-America status.

Two of this year’s first-team selections will be in action this upcoming week in the New River Valley as Minnesota State’s Coley Ries and Angelo State’s Brandy Marlett lead their teams into action looking for a 2017 national championship.

Additionally, there are 11 returning honorees, including first-team selection Nicki Sprague of Azusa Pacific, who is the only four-time All-American on this year’s list of honorees. It is the senior second baseman’s second first-team nod (2015), to go along with second team recognition in 2016 and third team honors in 2014.

With only 11 repeat All-Americans, 40 student-athletes join this prestigious group and can now call them themselves a NFCA Division II All-American.

Concluding an outstanding four-year career with her first-team nod, Sprague led the Cougars to a 32-18 record and a third-place finish in the PacWest Conference. The four-time all-conference selection was the team leader in batting in batting average (.383), on-base percentage (.476), and RBIs (61). She led the PacWest in RBI, while ranking in the conference’s top-10 in both batting average and on-base percentage.

Leading the way for UNG and helping the Nighthawks reach the Super Regionals are first-teamers Stephanie Hartness and Kylee Smith. Hartness, a senior, earns back-to-back honors after another stellar campaign roaming centerfield for the Nighthawks. A team leader in several offensive categories, Hartness also leads the Peach Belt Conference (PBC) with a .432 batting average, runs scored (68) and slugging (.781), and ranks fifth in RBI (48), sixth in stolen bases (23) and tied for seventh in home runs (12). She ranks second in the NCAA in runs scored and current rates as the seventh hardest batter to strikeout (4K/198 AB)

Smith, the first of two freshmen on the first team, made a great first impression as UNG’s ace. The rookie hurler led the PBC with a 30-5 record, miniscule 1.04 ERA and 235 strikeouts, while ranking second in appearances (42) and opponent’s batting average (.186).

Guiding their respective teams back to the Division II Championships for the first time since 2011 and 2010, respectively, Ries and Marlett join Smith as first-team pitching honorees. Ries, the only unanimous first-team selection and a finalist for Schutt Sports/NFCA National Player of the Year, has recorded a NCAA Division II-best 36 wins (36-3), 426 strikeouts and 16 shutouts (tie), while also limiting opponents to a NCAA-low 3.53 hits per seven innings. The Eagle Lake, Minn. native also leads the Northern Sun Intercollegiate Conference in ERA (1.02) and opponent batting average (.146).

Marlett garners her first All-American accolade. The junior righty has compiled a 28-4 record with a 1.25 ERA and 295 strikeouts in 212.2 innings of work. The Lone Star Conference Pitcher of the Year’s strikeout numbers rank sixth in the NCAA, while she is also ranked sixth in strikeouts per seven innings (9.7) and ninth in victories.

Grabbing the first-team honor at catcher is Caldwell’s Monasseri. A second-team selection in 2016, the junior from Monroe, N.J. finished her campaign with a .503 average (3rd/NCAA), 11 homers, 11 doubles and a NCAA-best .624 on-base percentage. She posted a .787 slugging percentage and drove in a team-best 67 runs (6th/NCAA). Additionally, the Diamond Sports Catcher of the Year ranked sixth in the NCAA with 48 walks and was a top-10 finalist for the Schutt Sports/NFCA National Player of the Year.

The 2017 NCAA Division II home run leader (22) Maddie Dow of Southern Arkansas takes home the first-team plaudit at first base. The senior ended her illustrious career at SAU by etching her name in the record books. Dow, the Great American Conference Player of the Year, leaves SAU as the program’s career leader in batting average, on-base percentage, hits, home runs, RBI, walks and total bases. In 2017, she was the league-leader in average (.423), long balls, slugging (.899), OBP (.598), walks (54), hit-by-pitch (24) and total bases (151). Dow leads the NCAA with 54 walks, while her OBP and slugging rank second and fifth overall in the NCAA.

Third baseman Kaitlyn Bannister closed out a distinguished four-year career at University of Alabama in Huntsville by becoming a two-time NFCA First-Team All-American. The senior from Albertville, Ala.  is the two-time Gulf South Conference Player of the Year and has been selected to an NFCA All-Region team all four seasons. She currently ranks in Division II's top 10 in several offensive categories, including a NCAA-best 71 RBI. Bannister finished 2017 with a single-season UAH record .482 batting average, while collecting 18 doubles and 21 home runs (t-2nd/NCAA). She slugged .906 (4th/NCAA) and drew 30 walks, which attributed to her .545 on-base percentage (10th/NCAA).

Augustana’s Sarah Kennedy is the first-team shortstop selection. It marks the second honor for the senior, who earned second-team recognition as a sophomore. A top-10 finalist for Schutt Sports/NFCA National Player of the Year, Kennedy ended the season batting .505 with 95 hits, including a NCAA Division II single-season record 32 doubles. The Bettendorf, Iowa native also launched 15 home runs and produced a .926 slugging percentage. She drove in 58 runs, while scoring a team-high 60 and leading the country with 174 total bases. Along with her nation’s best 32 doubles, she ranks near the top in batting average (2nd), hits (3rd), slugging (3rd), OBP (6th- .549)

Joining Hartness in the outfield are first-time honorees Christa Reisinger of Truman State and Nicole Nordie of Texas Woman’s University. Reisinger, the Great Lakes Valley Player of the Year, has all but secured the NCAA Division II batting title with a .509 average and is tops with 110 base knocks. She is among the nation’s top 10 with .571 on-base percentage (4th) and 1.19 run per game (5th). The Winfield, Mo. native set Truman’s single-season records for games played (63), at-bats (216), runs scored (75), hits, and total bases (152), while collecting a .988 fielding percentage thanks to just one error in 80 chances.

Nordie was named Lone Star Conference Player of the Year and currently leads the LSC in batting average (.458) and hits (88). This season, and for the second time in her career, Nordie matched the TWU and LSC individual game record with five hits. The senior is tied for 10th in the NCAA with 15 doubles and also ranks in the league’s top-10 in slugging, on-base percentage, runs scored and stolen bases.

The second rookie on the first team is designated player Haley Simonds of Newberry College. The Pasadena, Md. native enjoyed a breakout freshman season for the Wolves. Simonds was a .397 hitter that finished third in the South Athletic Conference with 12 round trippers and a .743 slugging percentage, while her .478 on-base percentage ranked fifth in the league. She registered 13 multiple-hit and 16-multiple RBI contests.

Earning her second straight first-team honor and third All-American accolade at the Utility-Pitcher position is Wayne State University’s Lyndsay Butler. A finalist for the Schutt Sports/NFCA Player of the Year, Butler had a tremendous senior campaign in which she has recorded a NCAA and career-low 0.68 ERA and is tied for fourth with 15 shutouts. For the season, Butler was 24-11 with 211 strikeouts and a .175 batting average against. Offensively, she hit .442 with 87 hits, 10 doubles, five triples, seven long balls, 39 RBI and 52 runs scored. Closing out an illustrious career, the Cambridge, Ontario native is the only person in NCAA softball (DI, DII, DIII) with over 300 career hits (338) and 1,000 strikeouts (1,053).

Coming in with the utility-non-pitcher recognition is Cedarville junior Brianne O’Dell. The 2017 Great Midwest Athletic Conference Player of the Year helped the Lady Jackets to a 30-15 record and the No. 1 seed in the conference tournament. Batting .461, O’Dell recorded a school-record 21 doubles (t-5th/NCAA) to go along with three triples, five homers and 51 RBI. Additionally, she was named the recipient of the 2017 NCCAA’s Softball Game Play 4 LIFE Character Award.

Martini earns her second straight first-team honor. The one-person wrecking crew for the Panthers, Martini helped AU to its third straight Super Regional appearance. The two-time Northeast-10 Player of the Year leads NCAA Division II with a 1.027 slugging percentage, is tied for the highest RBI total (73) and is second in RBI per game (1.35). She has drawn the third most walks (49) in the Division II and is third with a .597 on-base percentage. Additionally, she hit .483 (8th/NCAA) with 18 round trippers (t6th/NCAA).

Houck’s arm guided West Chester to a Super Regional appearance as well as a PSAC Conference Tournament title. A first-team All-Pennsylvania State Athletic Conference (PSAC) selection and tournament MVP, Houck is second in the NCAA with 34 wins, while ranking sixth with 14 shutouts. Posting a 1.50 ERA and .212 batting average against, the southpaw is already the program’s all-time wins leader and strikeout queen and still has one more season to play. She currently holds, or has tied, 10 school records on the career and single-season levels, including seven single-season marks in 2017.

Garcia is the third player on the first team make her home at the hot corner. Named the California Collegiate Athletic Conference (CCAA) Newcomer of the Year, Garcia won the CCCAA’s triple crown topping the league with a .451 batting average, 15 home runs (xx/NCAA) and 62 RBI (xx/NCAA). The Oxnard, Calif. native posted CSUMB single season records for hits (82) and slugging (.805), while her long balls and batting average rank second.

Garman, the Golden Shoe recipient, leads NCAA Division II swiping 53 bases in 54 attempts and averaged 1.23 per game. The speedy senior, hit .322 on the year with 48 hits, three doubles, a triple and 41 runs scored.