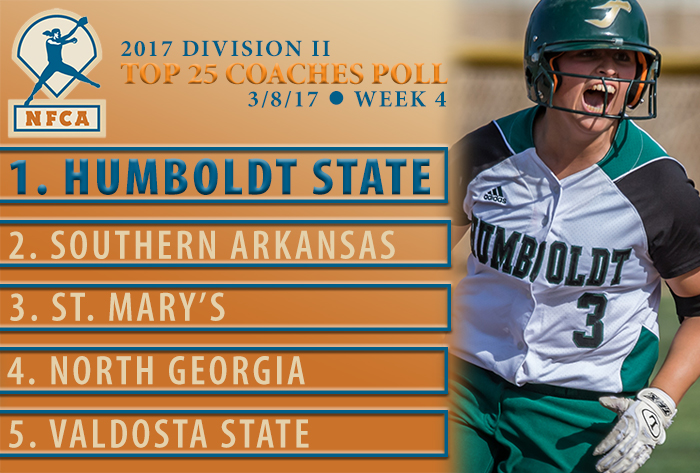 LOUISVILLE, Ky. – Humboldt State continued its hold on the No. 1 ranking in the NFCA Division II Top 25 Coaches Poll for games played Feb. 27 through March 5. As the majority of the poll continues to see significant shuffling, the top five program held steady to their respective rankings.

Despite suffering their first defeat of the season, the Jacks (12-1) received 14 first-place votes and 397 out of a possible 400 points. In California Collegiate Athletic Association (CCAA) play, HSU took three-of-four from Stanislaus State (4-1, 7-2, 2-6, 4-3) as they improved to 7-1 in league play.

Making the biggest leap this week is a red-hot Angelo State (264) squad as it knocked off then-No. 22 Lubbock Christian in a non-conference doubleheader by the scores of 10-0 and 7-1. The Rambelles (19-1), who have won 15 straight, made a nine-position move to No. 8.Southern Arkansas picked up the other two first-place votes and totaled 381 points. The Lady Muleriders (18-2) took care of business by outscoring Oklahoma Baptist, 50-6, in a four-game Great American Conference series sweep.

Returning to the poll after a three-week hiatus is No. 22 Wayne State (Mich.). The Warriors (11-4) have won nine of 10 after starting 2-3 at the NFCA Division II Leadoff Classic. Making its first appearance of 2017 is Southern New Hampshire, who is off to a 5-1 start.

Dropped Out: No. 7 Grand Valley State, No. 14 Colorado Mesa