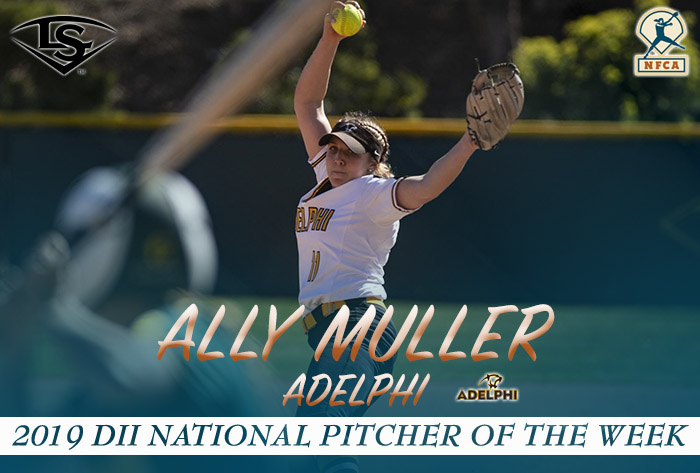 Reisinger was the catalyst for the Bulldog’s run production in six victories last week. She had her hand in 25 of the Bulldogs’ 59 runs by driving in 10 and scoring 15 times. The senior centerfielder was 12-for-16 (.750) at the plate with two triples, three home runs and five walks. Reisinger posted a .818 on-base percentage, slugged 1.562 and was a perfect 8-for-8 on the base paths. She recorded five multiple-hit games.

The Winfield, Mo. native registered three hits with a triple, two RBI and three runs scored in games one versus Lincoln (Mo.). She also crossed the dish three times in the second game of doubleheaders versus Illinois-Springfield and McKendree. Reisinger drove in four runs with a triple and homer in game one versus the Prairie Stars. She swiped at least one base every game, including two in both ends of a twinbill against the Bearcats.

Muller tossed three shutouts, including a no-hitter versus Saint Rose, keying the Panthers to a 5-0 week in Northeast-10 Conference play. The sophomore righty’s first collegiate no-no came in a 7-0 win over the Golden Knights in which she fanned eight and walked four. She capped off the three-game sweep of Saint Rose, limiting the opposition to just three hits and striking out eight.

Muller opened the week with a four-hit, 11-strikeout performance against Southern Connecticut. Over her 21 innings of work, the NE-10 Pitcher of the Week posted three wins, struck out 27, walked five and held her opponents to a .101 batting average (7-for-69).