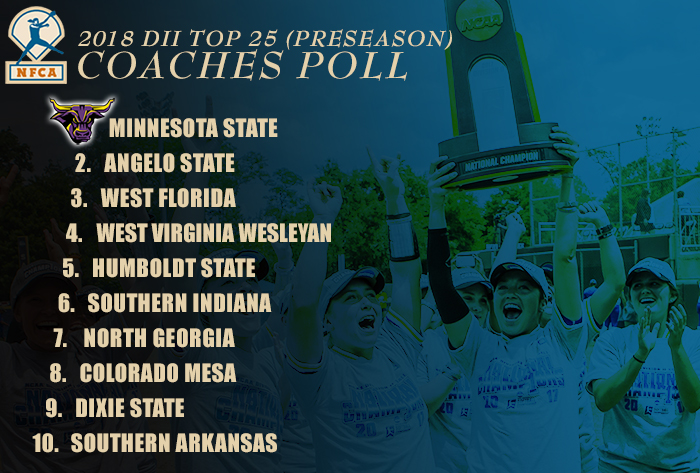 LOUISVILLE, Ky. – Defending national champion Minnesota State was selected No. 1 in the 2018 NFCA Division II Top 25 Preseason Poll, announced by the Association on Wednesday. The Mavericks (64-7) garnered 14 of a possible 16 first-place votes and 396 points.

In route to its first national title, Minnesota State went 10-1 in the postseason and set a program record for wins. The Mavericks swept through regionals before earning a hard-fought Central Region title on the road at top-seeded Harding. The highly competitive Super Regional featured three one-run contests with the Mavericks winning games one (1-0 in 10 inn.) and three (7-6). As the No. 2 overall seed, Minnesota State was a perfect 5-0 in Salem, Va., including a pair of 5-1 triumphs over national No. 1 seed Angelo State in the championship series.

The Rambelles (60-7), national runners-up to the Mavericks, picked up the other two first-place votes and 386 points. Angelo State was ranked No. 1 in the 2017 NFCA poll for seven weeks, including the final five of the regular season. The Rambelles were the top seed in the South Central Region and won their first eight postseason games, sweeping through regionals and supers and knocking off Humboldt State, West Virginia Wesleyan and Armstrong State before taking on Minnesota State in the championship series.

Gulf South Conference preseason favorite West Florida was selected third with 351 points. As the South Region’s top seed, the Argonauts (46-15) swept through regional and super regionals and finished the postseason with a 6-2 mark. The 46 wins were the most for a West Florida program since 2005.

National semifinalists West Virginia Wesleyan came in at No. 4 with 348 points. The Bobcats (51-10) put forth a strong showing in their first National Championships’ appearance with a 2-2 effort. WVWC shut out Molloy and West Florida with its defeats coming at the hands of the Angelo State and Minnesota State. The victory over the Argonauts was the 1,000th career win for long-time Bobcat skipper Steve Warner.

Humboldt State and Southern Indiana come in at No. 5 and 6 respectively. The Jacks (51-10) made their second straight appearance at the National Championships. As the West Region’s No. 2 seed, Humboldt State went undefeated in regional and super regional play and finished 6-2 in the postseason.

The Screaming Eagles (46-14) earned their program’s first trip to the National Championships. As the Midwest Region’s No. 2 seed, USI swept through the regional and super regional stages and finished 5-2 in postseason play.

As the West Region’s No. 4 seed, the Trailblazers (42-14) came out of the West Regional No. 1 but fell to Humboldt State in the supers. The Lady Muleriders (45-16), picked as the preseason favorites in the Great American Conference, reached their second straight Central Regional in 2017.

The 2018 NFCA Division II Top 25 Poll is voted on by 16 NCAA Division II head coaches with two representing each of the eight NCAA regions.

The 2018 NFCA Division II Top 25 Coaches Poll is voted on by 16 NCAA Division II head coaches with two representing each of the eight NCAA regionals.