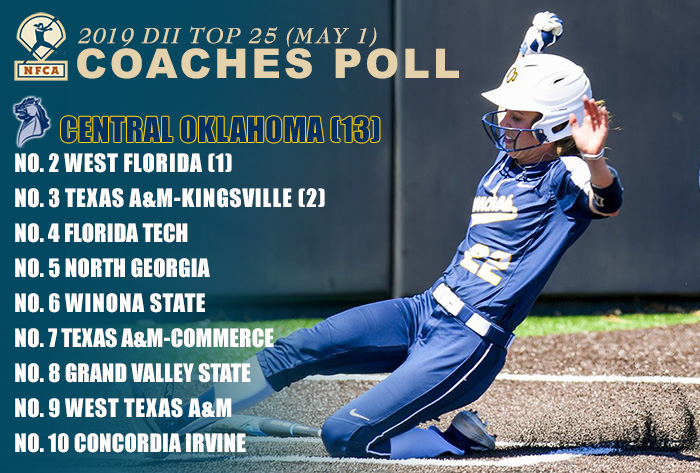 UCO wrapped up regular-season play with a 3-1 showing, sweeping Missouri Southern and splitting at Pittsburg State and will head into the MIAA tournament as the top seed. It marked the third regular-season title in six years.

No. 6 Winona State and No. 7 Texas A&M-University Commerce each improved one spot. The Warriors (45-5) are the hottest team in Division II, ending the regular season on a program-record 30-game winning streak. Winona State did not lose in April and went undefeated through Northern Sun Intercollegiate Conference play to take home its second straight NSIC regular-season championship.

The Lions (37-11) took two-of-three at RV Cameron and will be the No. 2 seed in the Lone Star Conference’s single-elimination postseason tournament.

Grand Valley State moved up two spots to No. 8, while West Texas A&M dropped three positions to No. 9. The Lakers (40-8) claimed its third straight Great Lakes Intercollegiate Athletic Conference (GLIAC) regular-season title by sweeping Ferris State and Northwood in GLIAC doubleheaders. The Lady Buffs (31-12) dropped two-of-three to then-No. 19 Tarleton State and will be the third seed at the LSC tournament.

PacWest regular-season champs Concordia Irvine pushed its winning streak to 15 games. The Eagles (44-6) wrapped up their regular season with four league wins to earn its second straight PacWest crown and the conference’s automatic bid to the NCAA Tournament.

Following this weekend’s conference tournament play, the NCAA Division II Softball Selection Show will be held Monday, May 6 at 10:00 a.m. ET on NCAA.com

The 2019 NFCA Division II Top 25 Poll is voted on by 16 NCAA Division II head coaches with two representing each of the eight NCAA regions. Records reflect games played through April 28, 2019.