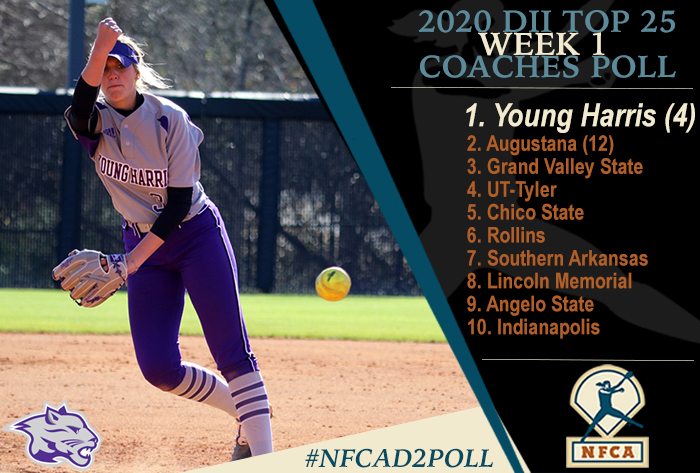 LOUISVILLE, Ky. – For the first time in program history, Young Harris is No. 1 in the NFCA Division II Top 25 Coaches Poll, announced by the Association on Wednesday. Despite just four-first place votes, the Mountain Lions (9-0) accumulated 382 points to edge No. 2 Augustana (380), which tallied the other 12 first-place nods.

The poll has seven new faces- No. 4 UT-Tyler, No. 6 Rollins, No. 9 Angelo State, No. 13 Dixie State, No. 19 Trevecca Nazarene, No. 22 Rogers State and No. 23 Lenoir-Rhyne. The fourth-ranked Patriots (10-0) are in their second year of transitioning from NCAA Division III, but are eligible for the NFCA’s poll despite not being eligible for NCAA postseason.

Moving up from No. 5, YHC has raced out to a 9-0 start, sweeping the fields at the Columbus State Classic (4-0) and the Bearcat/Fleet Invitational. The Mountain Lions picked up eight regional wins, posted two shutouts, recorded three run-rule victories and averaged 7.8 runs over the first nine contests.

The Vikings (8-2) opened the year by going 4-2 against Lone Star Conference foes, which included victories over then-No. 10 Texas A&M University-Commerce, then-No. 15 Cameron and Angelo State. They followed with a pair of doubleheader sweeps at MSU Denver and Colorado Mines.

No. 3 Grand Valley State begins their season on Feb. 21. No. 4 UT-Tyler opened the season with a 10-0 mark, which included wins over then-No. 23 Arkansas Tech and new-No. 7 Southern Arkansas. The Patriots won all five games at the Desert Stinger Tournament, including four consecutive come-from-behind victories.

Chico State and Rollins also began their respective seasons undefeated. Behind a strong pitching staff, the Wildcats (9-0) catapulted to No. 5 from No. 20, which included a win over then-No. 10 Concordia Irvine. Chico State’s staff has posted five shutouts and a 0.56 ERA, while holding their opponents to a .140 batting average.

The sixth-ranked Tars (11-0) are getting it done with pitching as well. Rollins has posted five shutouts and own four one-run victories already. The staff has recorded a 0.65 ERA and held their opposition to a .147 average.

The seventh-ranked Muleriders (10-2) have wins over Angelo State, then-No. 21 Tarleton State, Rogers State and A&M-Commerce. They only two defeats came against then-No. 2 Texas A&M-Kingsville and UT-Tyler.

No. 8 Lincoln Memorial enters the top-10 after starting the season 13th. The Railsplitters (9-1) are hitting .338 and averaging just over seven runs a contest. Angelo State already has 16 games under its belt with victories over then-No. 7 Central Oklahoma, new-No. 16 Saint Leo and then-No. 9 Florida Tech. All three of the Rambelles (13-3) defeats have come to ranked opponents – Augustana, Southern Arkansas and then-No. 18 University of Alabama in Huntsville.

No. 10 Indianapolis opened its season with a 6-1 mark. The Greyhounds took two-of-three at Montevallo and also topped Kentucky Wesleyan and Tiffin each twice.

The 2020 NFCA Division II Top 25 Poll is voted on by 16 NCAA Division II head coaches with two representing each of the eight NCAA regions. Records reflect games played through Feb. 16.

The 2020 NFCA Division II Top 25 Coaches Poll is voted on by 16 NCAA Division II head coaches with two representing each of the NCAA’s eight regions. Records reflect games played through Feb. 16 with first-place votes in parentheses.