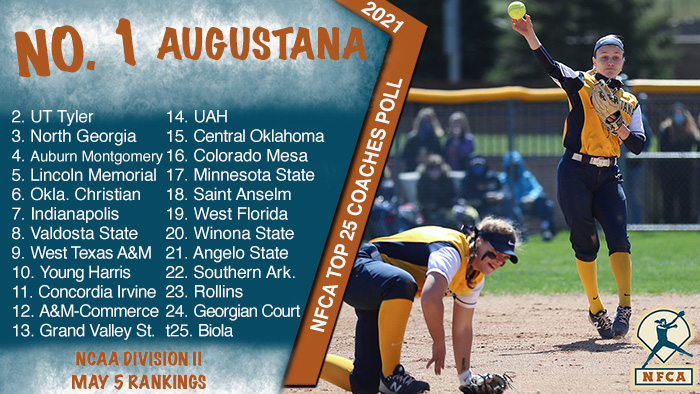 LOUISVILLE, Ky. – Augustana tightened its hold on No. 1 in this week’s NFCA DII Top 25 Coaches Poll.  The Vikings (36-4), coming off two doubleheader sweeps, enter their fifth week on top of the rankings and are unanimous for the second time this season.

Valdosta State (32-6), which had been No. 2 the last three weeks, fell to No. 8 after being swept on the road by No. 14 UAH (30-10), which moved up four spots after the Gulf South Conference (GSC) series sweep. That made the way for UT Tyler and North Georgia to inch up one position each to No. 2 and 3, respectively, while Auburn Montgomery continued its ascent up the poll to No. 4.

Idle and No. 5 Lincoln Memorial and No. 9 West Texas A&M were the only other programs to improve on their top-10 rankings. The ninth-ranked Lady Buffs (32-10) received back-to-back perfect games from Kyra Lair and Emilee Wilson to sweep rival Easton New Mexico and improve to 32-10.

The 2021 NFCA Division II Top 25 Poll is voted on by 16 NCAA Division II head coaches with two representing each of the eight NCAA regions. Records reflect games played through May 2. In 2021, universities that are not competing will not be eligible for the poll.

New to Poll: No. 24 Georgian Court

The 2021 NFCA Division II Top 25 Coaches Poll is voted on by 16 NCAA Division II head coaches with two representing each of the NCAA’s eight regions. Records reflect games played through May 2.