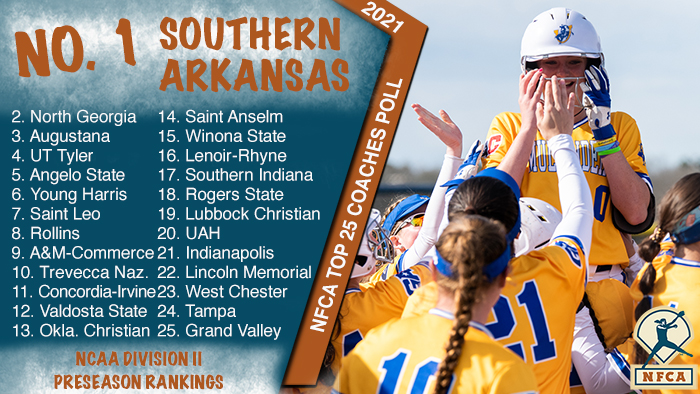 LOUISVILLE, Ky. – Southern Arkansas, which ended 2020 on a 16-game winning streak, is the No. 1 team in the 2021 NFCA Division II Top 25 Preseason Coaches Poll. The Muleriders collected all 16 first-place votes and 400 points to start the season atop the rankings.

Southern Arkansas was picked unanimously as the Great American Conference (GAC) preseason favorites, earning the preseason No. 1 nod for the fifth consecutive year. The Muleriders posted a 22-2 mark, including a perfect 12-0 mark in GAC play.

North Georgia, 2019 national champion Augustana, UT Tyler and Angelo State follow at No. 2 through No. 5, respectively. The No. 2 NightHawks (23-4) ended 2020 with Division II’s top ERA at 0.88 and the Vikings (16-3) captured seven straight victories to cap off their season.

UNG’s Peach Belt Conference (PBC) rival Young Harris (19-3) comes in at No. 6, while a duo from the Sunshine State Conference – Saint Leo (23-7) and Rollins (21-3) – rank seventh and eighth. Tenth-ranked Trevecca Nazarene (15-3), out of the Great Midwest Athletic Conference, rounds out the top 10.

The 2021 NFCA Division II Top 25 Poll is voted on by 16 NCAA Division II head coaches with two representing each of the eight NCAA regions. In 2021, universities that are not competing will not be eligible for the poll.

The 2021 NFCA Division II Top 25 Coaches Poll is voted on by 16 NCAA Division II head coaches with two representing each of the NCAA’s eight regions. Programs that do not participate during the 2021 season will not be eligible for the poll. 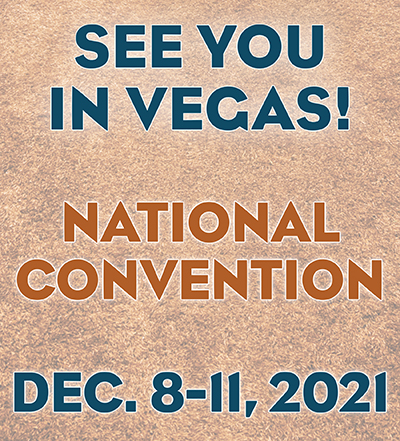