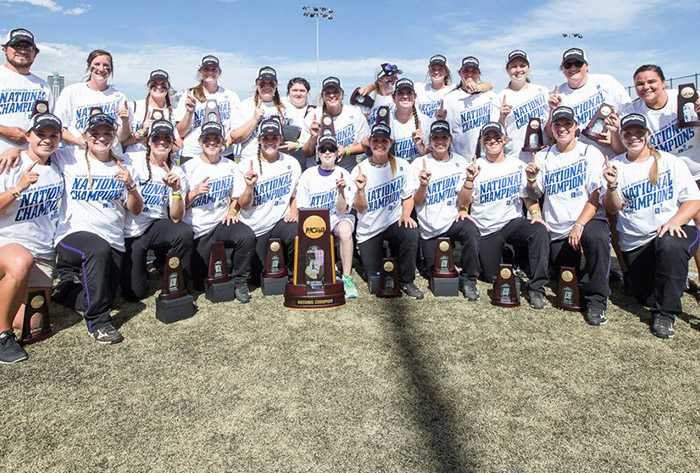 DENVER, Colo. – After forcing a deciding game with a 10-1 win over Humboldt State earlier in the day, the University of North Alabama softball team topped the Lumberjacks (54-8-1) 4-1 to claim the 2016 NCAA Division II National Championship on Saturday afternoon from the Regency Athletic Complex at Metropolitan State University of Denver. It marked the first national title for the program.

Tournament MVP Hillary Carpenter earned a pair of complete-game victories on Saturday. She finished the Championships undefeated at 5-0, tying an NCAA record for most wins in the finals. The junior southpaw allowed one run in each contest, scattered eight hits with nine strikeouts to finish the 2016 campaign, 33-3.

"I don't think it has hit me yet," said UNA head coach Ashley Cozart. "This team is just amazing. All year long they have won games in different ways. They've held leads, they have come back. We knew today, coming into this that we have done this before. We were not nervous or tight. They just came out and played like it was their last game."

In the title game, the Lions (60-7) scored all four runs in the first two innings. After being held scoreless on Friday by Humboldt State pitcher Madison Williams, UNA was able to string together some early hits on Saturday. In the bottom of the first, Courtney Shields reached on an error and eventually came around the score the first run of the game on Anna Gayle Norris's RBI single.

"I think we just changed what pitches we were looking for," said Shields. "We knew we needed to make adjustments from last night and that's what we did."

A three-run second gave the Lions and Carpenter all the runs they would need. A perfectly executed squeeze by Carmen Whitfield gave UNA a 2-0 advantage. With runners at first and third, Shields tripled down the rightfield line to make it 4-0.

In the fourth, Humboldt State's Julie Pena drove in Carly Perkins from first base with a double for the Jacks' lone run of the game. It would be the last hit for HSU as Carpenter shut down Jacks' offense the rest of the contest.

"I have always thought that the more I pitched in a game, the better I got," said Carpenter. "I was a little nervous today but I guess it was my adrenalin that kept me going."

Five different players had one hit each for the Lions in the second game. The triple by Shields capped a 5-for-7 day at the plate with four RBI. She was also named to the all-tournament team, along with Brooklynn Clark and Reagan Tittle.

"We ended our season on the biggest stage," said Head Coach Shelli Sarchett. "When you can end your season here, you can't ask for anything more except win a championship. I have to give credit to North Alabama. Things just didn't seem to go our way. I congratulate North Alabama on a terrific season and congratulate our team on a terrific season. There is no reason for my girls to hang their heads."

Julie Pena led HSU with a 2-for-3 effort at the dish. The Lumberjacks conclude with the program's best mark since 2008, the West Region title and the California Collegiate Athletic Association championship.

In the opener, Shields went 4-for-4 with two RBI and Carpenter limited Humboldt State to five hits in a 10-1 victory.

Leading 5-0, UNA doubled its run output with a five-run sixth inning to put the game out of reach. The Lions launched three home runs in the frame and finished with 14 hits in the contest.

After the Lumberjacks struck for a run in the first on back-to-back singles by Tiffany Hollingsworth and Breonna Bejaran, UNA responded with three runs in the bottom of the frame. With the bases full of Lions, Harlie Barkley was hit by a pitch to bring home the first run and tie the game. A sacrifice fly by Norris then scored Shields from third to give UNA the lead for good. Lee wrapped up the first-inning scoring with an RBI-single down the left line.

In the sixth inning, the Lions sent nine batters to the plate. With one out, back-to-back home runs by Shields and Clark gave UNA a 7-1 lead. Norris would later hit a two-run shot to left center to make the score 9-1. The final run came across on an error.

Barkley was 2-for-3 with an RBI, while Tittle and Lee added two hits each for North Alabama. Carpenter allowed a single run in the top of the first innings before settling in with six strikeouts.