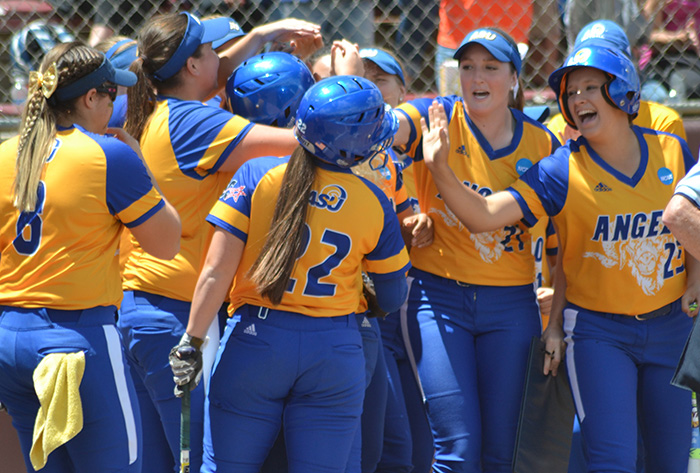 Marlett surrendered a run on four hits, struck out four and walked two as she improved to 29-4 on the year. In the pivotal fourth, NFCA Second-Team All-American Kenedy Urbany broke a scoreless deadlock with a leadoff blast to left, her 15th of the season. With a runner on second and one out, Danae Bina left the yard pushing Angelo’s lead to 3-0.

Trailing 4-0, Humboldt State got on the board in the top of the sixth, courtesy of Tiffany Hollingsworth’s ninth home run of the season. Angelo answered with a run in the bottom half and Urbany came on and provided a scoreless seventh.

Bina finished 2-for-3 with two RBI and a run scored. NFCA Third-Team All-American Kaylyn Paque was 2-for-2 for the Jacks. Madison Williams (24-10) went the distance in defeat, surrendering three earned runs on six hits. She fanned eight and walked a batter.

Hannah Vet (pictured front) showed why she has the second lowest ERA in Division II (0.86). The second-team NFCA All-American twirled two-hit shutout, her 13th of the season, as West Virginia Wesleyan defeated Molloy, 4-0 in its first ever NCAA Division II Championships appearance.

Retiring the first nine batters in order, Vet (27-4) fanned four and served up 16 ground ball outs as she improved to 27-4 on the season. Offensively, Olivia Gore drove in three runs, two coming on a long two-run home run to rightfield. She also dropped down a perfect bunt in the first to put WVWC on the board.

Morgan Bruce also homered for the Bobcats. Olivia Banulski and Milan Botte recorded the only two hits for the Lions. Chelsea Hawkes (20-12) suffered the defeat, allowing four runs, three earned, on seven hits with one strikeout in five innings. 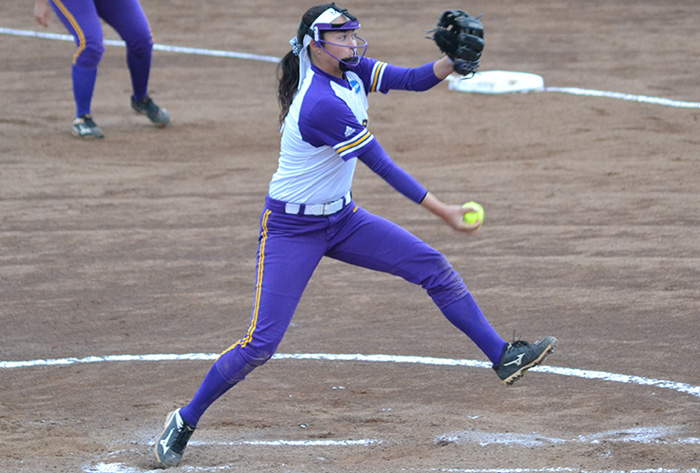 NFCA National Player of the Year Coley Ries (right) backed up her honor with a two-hit shutout and the Minnesota State offense hit a pair of home runs in a 5-0 victory over Southern Indiana. Samantha Buhmann produced the first run of the game with a laser over the leftfield fence and Jessica Kral tacked on three more with a three-run shot to dead center, a ball that was almost caught but found its way over the fence.

Ries (37-3) fanned seven, walked one and scattered five hits as she twirled her NCAA-best 17th shutout. The Minnesota State defense was on display as leftfielder Mckenzie Paap gunned a runner out from the warning track, trying to stretch a single into a double. The game ended on a double play when second baseman Ashley Thell made a sliding catch in foul territory and proceeded to throw out the runner trying to advance to second.

Armstrong State scored all six runs with two outs and held off West Florida in a 6-3 victory. The Argos cut the Pirates’ lead to one on two occasions, but Armstrong responded both times with two runs, pushing their lead back to three.

Jane Trzaska (18-7) went the distance and also went 2-for-3 with a two-run single to pace the Pirates. She scattered four hits, allowed two earned runs with one strikeout and no free passes. Macy Coleman knocked in three runs, two coming on a home run in the second.

Coleman’s opposite field long ball put the Pirates on the board. Trzaska’s base knock made it 4-1 in the third. After West Florida cut the deficit to 4-3 in the fourth on Callan Taylor’s two-run homer, the Pirates added three insurance runs for the final four-run margin.

Natalie Corbin also had two hits for the Pirates, going 2-for-4 with a run scored.