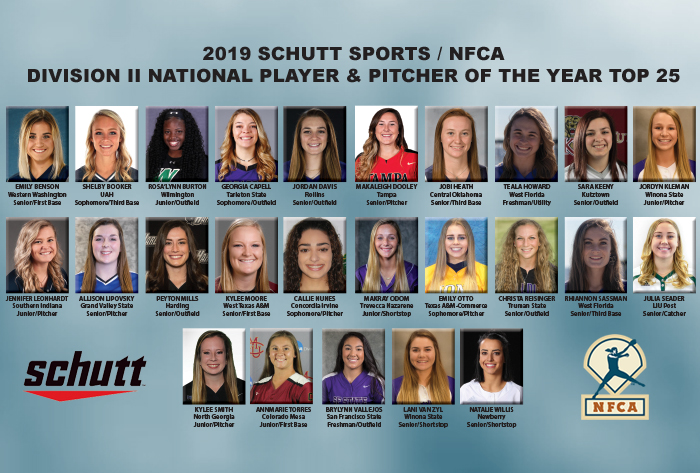 LOUISVILLE, Ky. – Twenty-five student-athletes have been selected finalists for the 2019 Schutt Sports/NFCA Division II National Player and Pitcher of the Year awards. The winners will be announced following the conclusion of the 2019 season.

Highlighted by 2018 winner Kylee Smith of North Georgia, the list of student-athletes is represented by 23 different programs and 18 conferences. Twelve student-athletes from the original Top-50 “Watchlist” made the cut with the final group consisting of 13 seniors, six juniors, four sophomores and two freshmen.

The Top 10 finalists will be announced on May 14 with the 2018 Schutt Sports/NFCA Division II National Player of the Year revealed on May 30, following the conclusion of the 2019 season.

New in 2019 is the announcement of two awards - Schutt Sports /NFCA Player of the Year and Schutt Sports / NFCA Pitcher of the Year. Up until the reveal of the awards, there will be one list for Top-25 and one list for Top-10. The respective winners will come from the top-10 list and will be voted on by the NFCA Division II All-American Committee.

The award was created in 2015 to honor the outstanding athletic achievement among softball student-athletes throughout Division II.

Shelby Booker, University of Alabama in Huntsville, Sophomore, Third Base