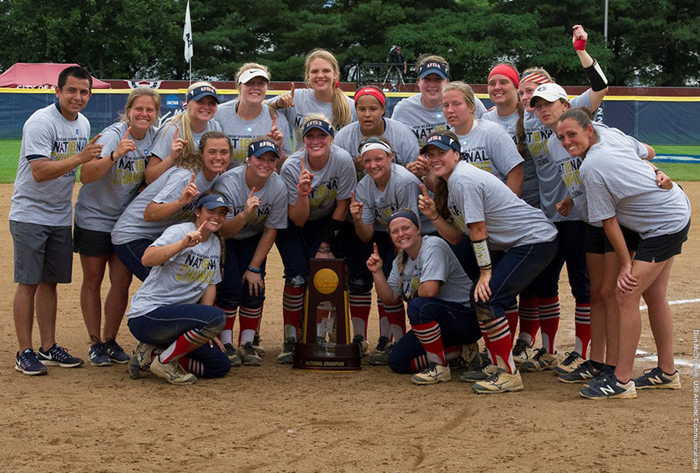 SALEM, Va. – University of Southern Indiana won the 2018 NCAA Division II national title, sweeping Saint Anselm (4-0, 8-3) in the Championship series on Monday at the Moyer Sports Complex. The Screaming Eagles were a perfect 5-0 in the tournament and lost just one game during their postseason run to USI’s first team national championship in school history.

USI hurler Jennifer Leonhardt was named the tournament Most Outstanding Player. She finished 5-0 with a 1.44 ERA and 40 strikeouts in 34 innings. The sophomore tossed a no-hitter, twirled two shutouts, completed four games and held her opponents to a .091 batting average.

USI's improbable march to the championship included a 14-1 postseason record for a team that finished the regular season with a 27-22 mark and the No. 6 seed in the GLVC Tournament. The Eagles captured the conference title with a perfect 4-0 mark and the NCAA II Midwest Region #1 Tournament title with a 3-1 record before sweeping the University of Illinois Springfield in the NCAA II Midwest Super Regional.

After a 2-0 loss in the first game of the Northeast-10 Championship, Saint Anselm earned the right to host the East Regionals and the East Super Regionals. Across that five-game span, the Hawks recorded wins against formidable Merrimack, Southern New Hampshire and LIU Post programs to claim the program's first-ever East Region title and a trip to Salem.

Competing in the first "Elite Eight" from a field of 64 since the men's basketball team in 1999-00, Saint Anselm posted back-to-back walk-off victories against No. 8 Southern Arkansas and No. 25 Saint Leo. After an 11-5 loss to Southern Arkansas, the Hawks edged the Muleriders by a 3-0 margin on Sunday to earn the right to take on Southern Indiana for a national title in a best-of-three series.

The Hawks made it interesting in the bottom of the seventh, loading the bases with two outs to bring up the tying run, but Smith got the final out inducing a grounder to second.

The only offense Leonhardt needed was provided by Bradley’s three-run bomb down the leftfield line in the top of the third inning. USI would add an insurance run in the top of the seventh on a RBI single by xx.

The Eagles sent 11 batters to the plate in the inning and got RBIs hits from six different players. Olivia Clark-Kittleson started the rally with an RBI-single when she legged out an infield hit, while Johnson continued the onslaught with an RBI-single that ricocheted off the third baseman's glove.

Leonhardt followed with a run-scoring hit through the middle of the infield and Bradley's two-run double in the ensuing at-bat put USI up 5-0. Allison Schubert gave USI a 6-0 lead with an RBI-single, while senior first baseman Marleah Fossett finished the scoring with another RBI-single.

Claire Johnson cracked her second home run in as many day, a solo shot in the third to make it 8-0.

Saint Anselm (44-13-1), who was playing for its first-ever national title, scored a run in the fourth inning and two in the fifth, but Leonhardt retired the final seven batters she faced after starting the game by retiring the first nine batters she faced.

Leonhardt, once again, picked up the win surrendering three runs off four hits and a walk. She had five strikeouts in the victory.