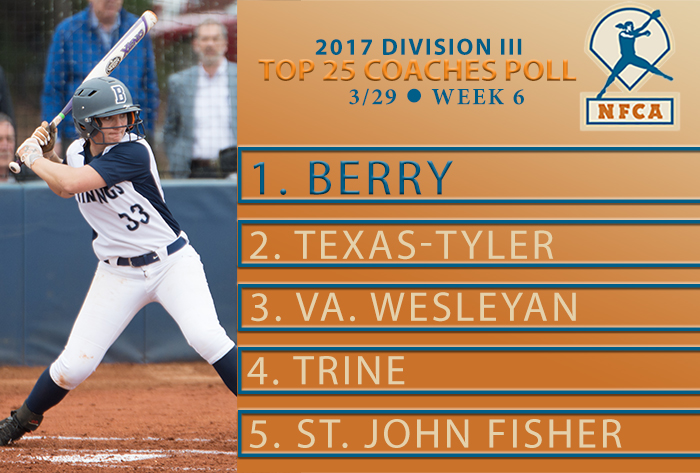 LOUISVILLE, Ky. — Berry is the No. 1 team in the NFCA Top 25 softball rankings for the third straight week and is the unanimous top team in the nation for the second consecutive week.

The (25-1) Vikings again received all eight first-place votes after going 4-0 for the week, including sweeps of Wesleyan (Ga.) and Birmingham-Southern in which they outscored their opponents, 49-8.

Defending national champion Texas-Tyler continues as the No. 2 team following its three-game American Southwest Conference sweep of new No. 21 Texas-Dallas (20-8), which had been ranked 16th at the time, while Virginia Wesleyan (25-1) rolled to six more victories to remain third. No. 4 Trine (18-0) and No. 5 St. John Fisher (10-2) round out an unchanged and consensus first five teams in the poll.

Lebanon Valley (13-3), which has won eight straight and 12 of its last 13, vaulted into the rankings for the first time this season at No. 23, while UMass-Boston, Wittenberg and Alma all added their names to the receiving votes category this week.