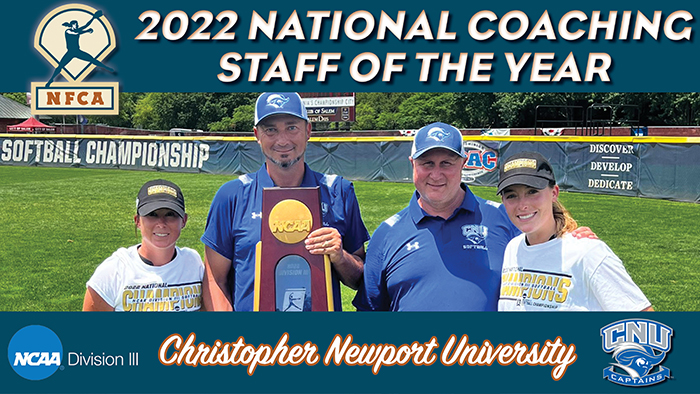 The Captains, led by head coach Keith Parr and assistants Savannah Couch, Wayne Vick and Mary Kennedy, went 47-1 this season, including a perfect 12-0 record in the postseason.

They didn’t even have to leave their home state, including beating fellow NCAA Finals participant Salisbury (42-8) in the Coast-to-Coast Conference Tournament and sweeping two hard-fought games from 2021 national champion and local rival Virginia Wesleyan in the Super Regionals — all played at Captains Park. Then, at the NCAA Finals site in Salem, Va., the Captains were 5-0.

They defeated two top 10-ranked teams at the NCAA Finals — Berry, 6-2, in their second game, and Texas Lutheran, 4-3 in nine innings, in their third game to reach the best-of-three championship series. The Captains topped then-unranked Worcester Polytechnic Institute, 8-6, in their finals opener, and took two straight from Trine, 6-3 and 3-0, in the championship series. Trine ended the season ranked second, while Texas Lutheran finished third and Berry was fourth in the last Top 25 poll of the season.

Christopher Newport was also the regular-season Coast-to-Coast titlist and won the NFCA Leadoff Classic in March in Columbus, Ga., becoming the third straight Division III squad to win both the Leadoff and the national championship in the same season.

The Captains were the top-ranked team in the country for the final nine weeks, and looked the part throughout, dropping just one contest all season, and winning their final 24 games. They averaged 8.6 runs per game while allowing just 84 runs all season.

The Regional and National Coaching Staffs of the Year are voted by NCAA Division III member coaches. All will be recognized at the 2022 NFCA Convention Awards Brunch on Dec. 10 in San Antonio.