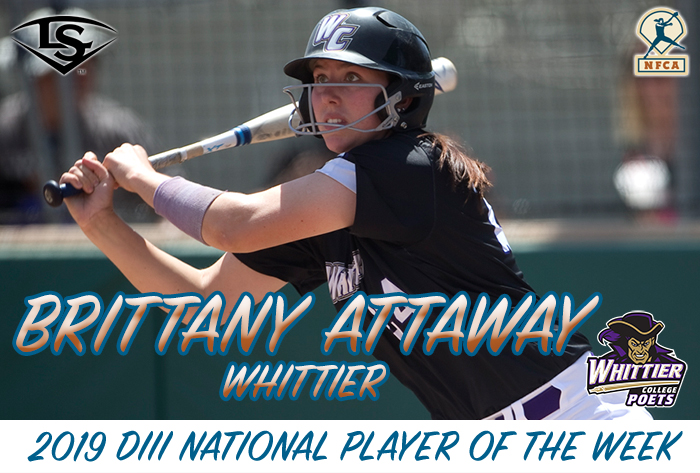 Senior left-hander Crumpton went 2-0 with a 0.00 earned-run average last week. The Alabaster, Ala., native tossed a perfect game with 10 strikeouts against Millsaps, then allowed just one hit over five innings in her second appearance of the week, yielding just a single walk in her 10 innings in the circle. She also helped herself at the plate, with two doubles and a .500 batting average.

Meanwhile, Attaway was perfect at the plate, going 5-for-5 with seven runs scored and eight RBI when opposing pitchers weren’t wise enough to walk her, which they did 10 times over four games. The Claremont, Calif., native hit two homers in an 11-10 win over Cal Lutheran, including the game-tying two-run blast in the bottom of the eighth.

WashU junior outfielder Mikaela Arredondo hit .500 (7-for-14) with a double, triple and six RBI in a four-game series against Carnegie Mellon. … Brandeis freshman pitcher Sydney Goldman went 2-0 with a 0.50 ERA, 14 strikeouts, two shutouts and just one walk over 14 innings. She came within a strike of her first career no-hitter in a 5-0 win over Case Western Reserve. … DePauw freshman pitcher Cami Henry tossed a no-hitter and recorded three wins in all, while limiting opposing batters to eight hits and no runs over 15.2 innings. … Calvin junior second baseman Hannah Horvath extended her hit streak to seven games by batting .545 with four runs, six hits, two steals and two RBI. … Carnegie Mellon freshman third baseman Piper Johnson had eight extra-base hits and went 10-for-20 (.500) with six doubles, two triples and four RBI. … Franciscan freshman pitcher Sarah Keating recorded two more victories to improve to 10-1 for the season. … East Texas Baptist sophomore outfielder Daniella Solis hit .667 with a double, two homers, three runs scored and three RBI, while not striking out once during the week. … Moravian senior left fielder Kat Spilman went 7-for-13 (.538) with four runs, seven RBI, a homer and her 200th career hit. … Franciscan sophomore second baseman Allyson Weiss hit .625 with two doubles, three homers, nine runs and eight RBI, while not striking out once in 17 plate appearances. … Bethany Lutheran freshman catcher Courtney Williams went 8-for-14 (.571) with five homers, including a grand slam, and 15 RBI. She had three of the homers in a twinbill sweep of Crown. … Keene State sophomore outfielder Cassie Woods hit .652 (15-for-23) with six doubles, a triple, six walks and eight RBI. She had the walkoff single in an extra-inning win over Castleton.