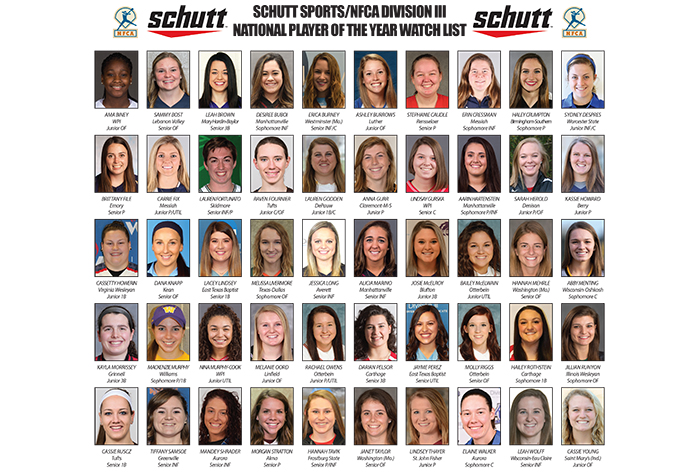 LOUISVILLE, Ky. — Fifty outstanding softball players have been chosen for the 2017 Schutt Sports/NFCA Division III National Player of the Year watch list, which will be paired down in the coming weeks until just one player remains at the conclusion of the season.

Three teams have three players each on the initial list — Manhattanville, Otterbein and Worcester Polytechnic Institute, while six others — Aurora, Carthage, East Texas Baptist, Tufts and Washington (Mo.) — have two apiece and 37 others have one selection.

There are 22 seniors, 18 juniors and 10 sophomores in the group.

The list is a collaborative effort between the NFCA’s Division III Head Coaches and All-America committees. The list will subsequently be cut to 25 and 10, before the winner is chosen.

The list will be adjusted to assure the best players during the season are considered, with the eventual winner coming from the group of 25.