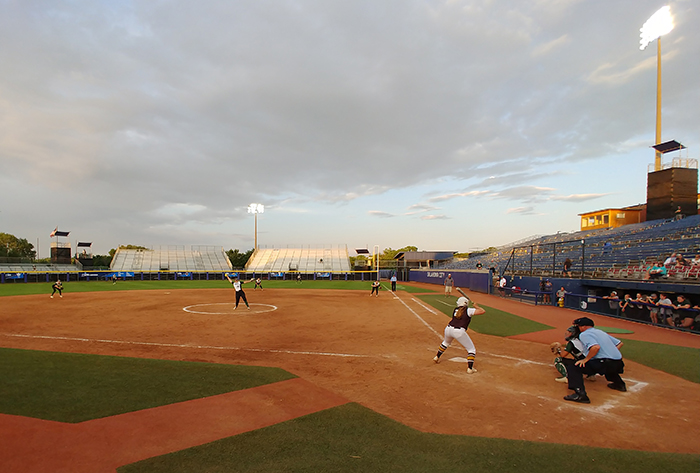 Fellow All-American Cassetty Howerin and Jessica Lindsay homered in the first two innings for the (51-2) Marlins, and Hull struck out 13 over seven innings, throwing 81 of her 115 pitches for strikes.

Virginia Wesleyan added an insurance run in the fifth, when Julia Sinnett doubled, moved to third, and scored on a pair of groundouts.

It turns out the (41-10) Norse’s best chance came in the bottom of the first, when All-American Ashley Burrows had one of her two hits in the game off Hull, and fellow All-American Anna Strien walked. But Hull fanned the next two batters to escape trouble.

Bailey Victoria had Luther’s only other hit in the seventh.

Virginia Wesleyan managed just five hits in the contest off All-American Samantha Bratland, who struck out three in the loss.

The (42-10) Norse scored all seven of its runs in a three-inning stretch to move forward to Sunday’s 3:30 p.m. game against Illinois Wesleyan.

Doubles by Abby Gehringer in the second and Addy Pender in the fourth accounted for the other two Norse runs. Samantha Bratland and Courtney Cooper combined to strike out seven for Luther in the contest.

The (38-12) Spartans jumped out to a 2-0 edge in the first on Maren Waldner’s two-run double, and Waldner singled and scored the first of three Case Western Reserve runs in the fourth. Grace Tritchler’s two-run homer accounted for the other two in the frame.

Case Western Reserve cut the deficit to one in the bottom of the seventh on Nicole Doyle’s RBI double, but reliever Cooper struck out the final two batters to close the door on the Spartans’ season.

Allie Colleran had three hits and doubled home two runs in a five-run second, as the (35-12) Bombers earned a rematch with defending national champion Virginia Wesleyan, while at the same time knocking out Texas-Tyler.

Alex Wright had a two-run single and Vanessa Brown also singled in a run in the decisive inning. Haley Congdon scatted seven hits in the complete-game victory.

The (44-5) Patriots had jumped out to an 1-0 edge in the first on All-American Andrea Gonzales’ single that scored her sister Victoria.

Shelby Fulk’s single up the middle in the bottom of the 10th scored Jillian Runyon, who had singled and stole second, to keep Illinois Wesleyan (38-11-1) undefeated in Oklahoma City, and deal Texas-Tyler its first loss.

Fulk opened the scoring in the bottom of the first, driving home All-American Sam Berghoff, who had just delivered a two-out double.

After that, neither team scored until the Patriots broke through in the top of the sixth, when Perez homered to left center. Texas-Tyler extended to a two-run advantage in the seventh, when Victoria Gonzales singled home pinch runner Romeo, who took over after pinch hitter Makayla Dominguez’s leadoff single.

Illinois Wesleyan answered in the bottom of the seventh on Julie Josten’s homer to force extra innings.