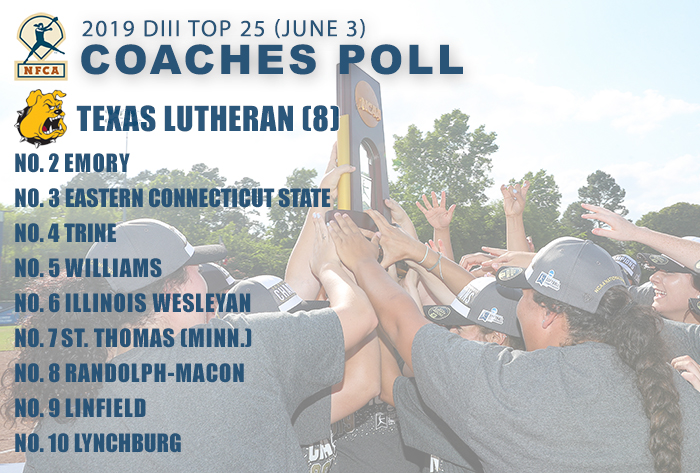 The (40-8) Bulldogs were undefeated in five games at the NCAA championship finals site in Tyler, Texas, and swept Emory 12-4 and 6-1 in the best-of-three championship series last Monday.

Emory (39-14), meanwhile, finished second in the rankings after finishing second nationally. The Eagles suffered their only two losses at the finals site on the final day to Texas Lutheran.

The six other NCAA championship finals teams all made the top eight, with third-place national finishers Eastern Connecticut State (36-13) and Trine (37-8) ranked third and fourth; fifth-place finishers Williams (39-7) and Illinois Wesleyan (39-10) at fifth and sixth; and seventh-place finishers St. Thomas (43-7) and Randolph-Macon (30-17) at seventh and eighth, respectively.

Linfield (39-8-1) and Lynchburg (37-15), who lost to the two national finalists in the NCAA super regionals, complete the top 10, followed by two-time national champion Virginia Wesleyan (42-6), which was upset by Lynchburg in the NCAA regionals.