NFCA Board rep Pepin chosen for Connecticut Hall of Fame 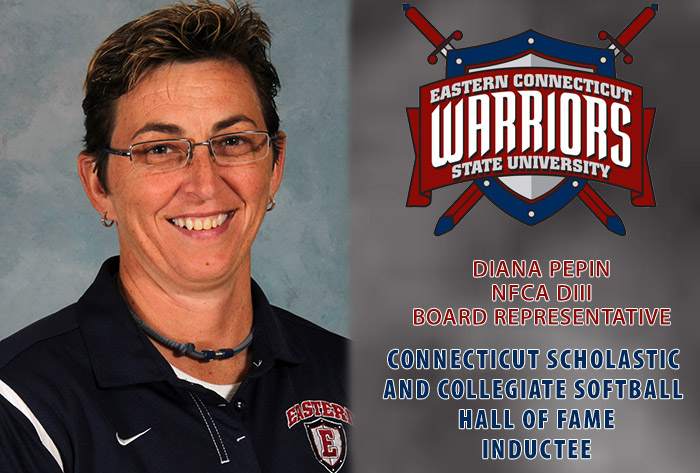 The Hall of Fame ceremony is scheduled 2:00 p.m. on May 21 at the Aqua Turf  Club in Plantsville, Conn.

Pepin, a 1992 Eastern graduate and member of the 1990 NCAA Division III national championship team, is the winningest head coach in the 40-year history of the program. Heading into the 2017 season, the Willimantic native has coached (603) and won (383) more games than any of the previous six coaches in  program history. She became the school leader in games coached on May 20, 2011 in the Warriors’ NCAA opener against Christopher Newport and became the program’s winningest head coach with her 285th victory in a 6-0 home triumph over Ithaca College in the 2012 NCAA regionals. Her overall record is 383-218-2 and she has won nearly 64 percent of her games.

“Diana is the longest-tenured softball coach in the program’s history, and under her guidance, the program has achieved high standards,” noted Eastern Director of Athletics Lori Runksmeier. “Moreover, her softball legacy is larger than simply what she has done at Eastern. Her passion for the sport is well-known within the softball community. Eastern is very proud of her many achievements.”

Pepin has led the Warriors to six NCAA Division III and one ECAC New England tournaments, back-to-back regional titles in 2010-11, seven Little East Conference regular-season and four LEC tournament titles. Her fourth win of 2017 will be the 1,000th in program history.