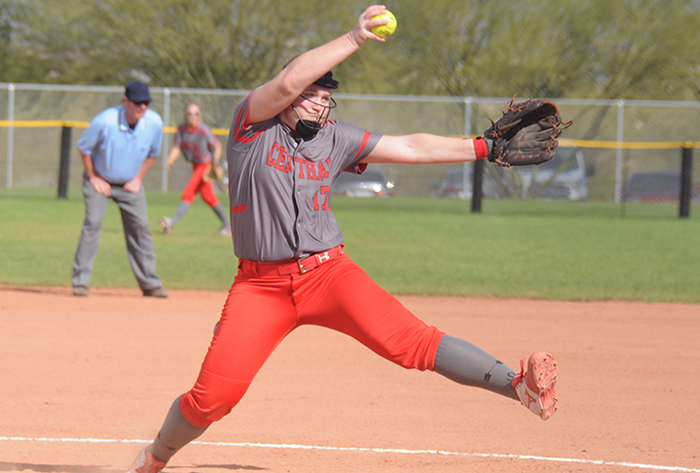 TUCSON, Ariz. – On a warm and picturesque Friday, Central, East Texas Baptist, Emory and St. Thomas posted 2-0 marks on the first day of the 2020 Division III Leadoff Classic at Lincoln Park. Along with those four squads, 13 teams picked up wins in a competitive day on the field.

No. 12 Central picked up wins over Transylvania (4-0) and No. 8 DePauw (7-2). In its opener, Sydni Huisman tossed a five-hit shutout (nine strikeouts) and Kaitlyn Andresen provided all the offense the Dutch would need with a solo home run in the top of the first. Andresen came up clutch against the Tigers, igniting a six-run sixth with a three-homer that keyed Central to the comeback win.

No. 4 East Texas Baptist knocked off DePauw, 6-1, and St. John Fisher, 1-0 in eight innings. The Tigers posted two runs in the top of the first and Beatriz Lara allowed a run on six hits with six strikeouts in the complete-game effort against DePauw. Preslye Cox went the distance in a pitcher’s duel, scattering seven hits and striking out three without a walk. Tough luck loser Emily Trotman also scattered seven hits with six punchouts and one walk for the Cardinals.

Emory posted a 6-2 win over St. Benedict and thumped LeTourneau, 12-0 in five innings. In game two, the Eagles were powered by a nine-run first in which they sent 17 runners to the plate. Greta Wilker drove in three runs, while Mattie Ryan finished 3-for-4 with a double, two RBI and two runs scored.

St. Thomas rallied for both their victories on day one. The Tommies fell in a 7-0 hole against LeTourneau, but dug out of it for a 10-8 win. Against George Fox, St. Thomas erased a 5-2 deficit and posted a 9-6 win. An eight-run third inning, highlighted by Elise Barnes’ and Sam Birling’s two-run doubles, was the pivotal frame in their opener. With the second game knotted at 6-6, RBI singles by Hayley Dunning and Bridget Armstrong and an RBI groundout plated the key runs in the top of the seventh.

WashU knocked off Alma, 6-3, while George Fox defeated Piedmont in their tournament openers. St. Benedict bounded back from its loss to Emory with a come-from-behind, eight-inning win over WashU. After squandering a 7-2 two-out lead in the seventh, CSB entered the bottom of the eighth trailing 9-7, but Grace Gilmore stroked a bases-clearing walk-off double to lift the Bennies to a 10-9 win.

Also bouncing back from tournament-opening losses were Piedmont, an 8-4 victor over Alma, Berry with a 13-8 win over No. 3 Linfield, Transylvania with its 7-3 triumph against Emerson, and Illinois Wesleyan, 3-0 over Pacific Lutheran in five innings.

Additionally, St. John Fisher, Linfield, No. 2 Christopher Newport, No. 19 Mary Hardin-Baylor, No. 1 Texas Lutheran and Babson picked up their first wins of the tournament.

Action begins at 8:00 a.m. tomorrow as Emory & Henry and Claremont-Mudd-Scripps will continue their halted game. The Athenas lead 7-2 in the bottom of the third. Two other contests, Christopher Newport/Mary Hardin-Baylor and Texas Lutheran versus Babson were declared no contests (agreed upon by head coaches of respective teams) due to the city of Tucson’s light ordinance.