No change at top in NFCA Division III Top 25 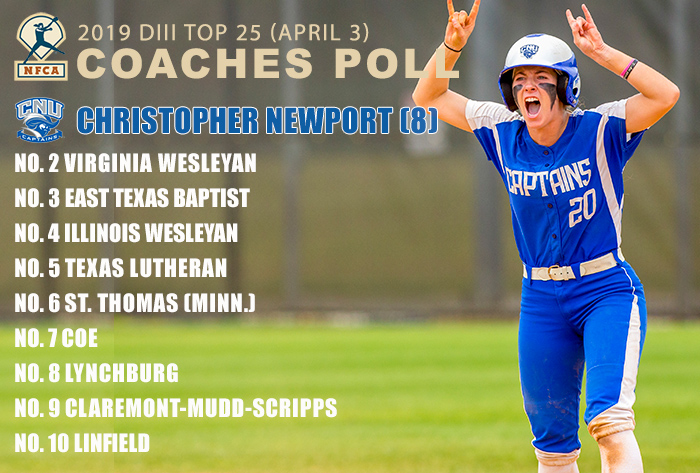 LOUISVILLE, Ky. — The top three in the NFCA Division III Top 25 have combined to win their last 14 games and remain unchanged this week, led by Christopher Newport University in the No. 1 spot.

The (18-2) Captains won two more games this past week, after ending two-time reigning national champion Virginia Wesleyan’s run of 25 straight weeks — a total of 720 days — at the top with a head-to-head split on March 24, which secured for them the No. 1 ranking for the first time in school history. Christopher Newport plays a doubleheader today at talented Randolph-Macon, which has two ranked victories this season.

Virginia Wesleyan (23-2) was the one of the Yellow Jackets’ victims two weeks ago, when the Marlins suffered both of their losses this season in a span of four days. The reigning champs quickly returned to form, going 4-0 last week.

East Texas Baptist (27-1), meanwhile, completed a conference sweep of University of the Ozarks on Monday to run its win streak to seven games, and Illinois Wesleyan (13-4) returned to the No. 4 spot, after spending last week at seventh.

Others receiving votes: The College of New Jersey 13 and Muskingum 11.