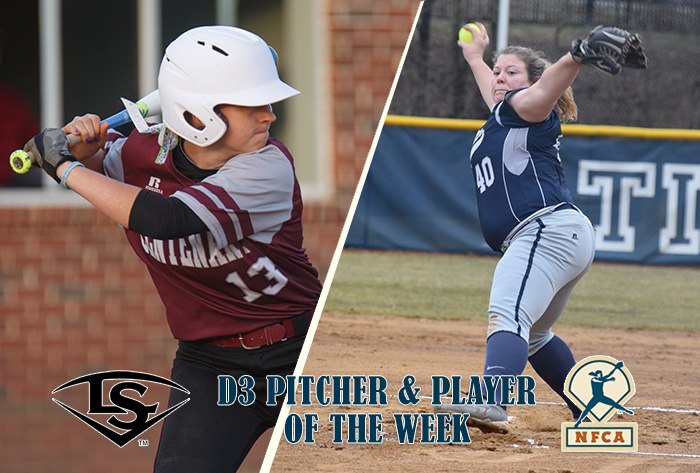 Senior right-hander Rohrer went 5-0 in six appearances and four starts in the circle, striking out 64 over 33.1 innings. The Purcellville, Va., native fanned a career-best 17 and allowed just two hits in a 3-2 win over Geneva, then struck out 12 and yielded four hits in a 2-1 victory at Thiel.

In her other two starts, Rohrer fanned 15 in a three-hit shutout of Grove City, and struck out 11 in a two-hit shutout of Washington & Jefferson. For the week, she allowed just four walks, including none over her last 19.1 innings. In the latest NCAA rankings (through Monday’s games), she ranks fifth in Division III in hits allowed per seven innings (3.5), seventh in strikeouts per seven innings (10.5) and 10th in both earned-run average and strikeouts.

Her seven RBI in a wild 19-18 eight-inning loss to LeTourneau tied a conference record and set the school mark for RBI in a single game. She also recorded her first multi-homer game when she hit two in a 9-4 triumph over the University of Dallas.

Farmingdale State junior pitcher Jaxie Collard was 3-0 and didn’t allow an earned run in a pair of complete games and a relief appearance. …  St. Catherine senior pitcher Krista Flugstad allowed just three earned runs over 16 innings, including two in a 4-2, 11-inning victory over Bethel, and none after the sixth. … Manhattanville junior pitcher/utility player Aarin Hartenstein went 6-for-11 (.545) with five runs, two doubles, two homers and six RBI at the plate, while also going 3-0 with 15 strikeouts in the circle. … Coast Guard senior center fielder Emma Hvozdovich hit .435 (10-for-23) with a double, four homers and 12 RBI. … Farmingdale State sophomore left fielder Jessica Lombardo paced a 6-0 week for the Rams with eight hits, four doubles, seven RBI and 14 total bases, while collecting 20 putouts and two assists over an unusually-busy week in the outfield. … Texas-Tyler junior utility player Lynsey Mitchell hit .889 (8-for-9) with three homers and 14 RBI in the Patriots’ three-game sweep of Texas-Dallas. … Farmingdale State freshman left fielder Amaris Negron had a hit in all four games she played, hitting .667 with eight hits, including a triple, homer and 14 total bases. … Westminster (Mo.) sophomore pitcher Katie Price pitched a no-hitter and a five-inning perfect game in a three-win week, and helped herself at the plate, going 6-for-12 with a double and four RBI. … Babson senior pitcher Ali Reilly went 4-0 for five appearances, with 25 strikeouts over 30 innings of work. She also hit .385 with four runs, two doubles, a homer and two RBI. … Hope senior catcher Hayley Reitsma homered twice and tripled in the nightcap of a doubleheader against Albion, collecting a school-record 14 total bases, as part of her 27 total bases for a week in which she hit .750, scored nine runs, had three triples, four homers and 10 RBI. … Rowan senior outfielder Morgan Smith went 8-for-12 (.667) with three runs, two homers and four RBI. …  Suffolk senior catcher Delaney Sylvester had a 14-hit week, including the 200th of her career, going 14-for-21 (.667) with 11 runs, four walks, a double, four homers and 13 RBI. … Suffolk freshman pitcher/utility player Payton Sylvester went 3-0 with two complete games, 23 strikeouts and just three walks in 17 innings. She fanned a career-high 11 in a win over Emmanuel, and also hit .458 (11-for-24) with eight runs, five doubles, a homer and four RBI. … Central (Iowa) sophomore center fielder Sara Tallman scored the first run of the game in three of her team’s four contests (including twice in the first inning), and hit .600 with six steals in seven attempts. … St. John Fisher senior pitcher Lindsey Thayer had a no-hitter, perfect game and one-hitter in a 3-0 week in the circle, fanning 38 batters and walking one over 19 innings. … SUNY Oswego sophomore outfielder/pitcher Rebecca Vilchez hit in all eight games, compiling a .517 average and .759 slugging percentage on 15 hits. … Randolph-Macon junior pitcher Candace Whittemore was a walk away from a perfect game in a no-hitter against Bridgewater in which she struck out six.