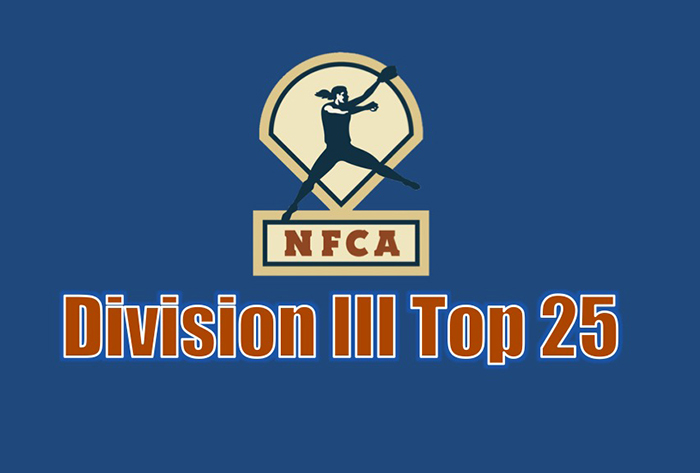 LOUISVILLE, Ky. — Salisbury and Virginia Wesleyan are the new unanimous choices behind clear-cut  No. 1 Texas-Tyler this week in the NFCA Division III Top 25 poll standings.

Capital Athletic Conference champion Salisbury (34-4) moved up three places to No. 2 after starting this year’s rankings in that spot, while Virginia Wesleyan (34-5) swept a doubleheader at Roanoke to take another step forward to No. 3 after spending the last two weeks at a school-best fourth.

Top-ranked Texas-Tyler (37-2) completed a 29-0 run through the American Southwest Conference season with a three-game sweep at Sul Ross and opens play in the ASC Tournament later today at its own Suddenlink Field. The Patriots have been No. 1 in the Top 25 all 10 weeks this season.

No. 4 Texas Lutheran (41-3) dropped only its third game of the season, which was also its first-ever loss in the Southern Collegiate Athletic Conference Tournament, 4-3 in 10 innings to Trinity, but then won three straight — including two victories over Trinity — to rebound for its third consecutive league crown.

Berry (36-6) made the biggest jump of the week — five spots — to tie the Bulldogs in fourth. The Vikings beat new No. 7 Birmingham-Southern (36-8) twice over the weekend to win its second straight Southern Athletic Association tournament championship.

Luther (32-2) suffered just its second loss of the season in the first game of a lopsided conference split with Wartburg to fall from second to sixth, while Claremont-Mudd-Scripps (28-7-1) also lost to drop one position to eighth. Emory (40-4) went 4-0 to close its regular season and move up to ninth, ahead of No. 10 Christopher Newport (34-7), which lost twice to Salisbury in the CAC Tournament.

Three-time reigning NCAA champion Tufts (22-7) is also back on the committee’s radar — in the receiving votes category — after winning 15 of its last 16, including its last six.