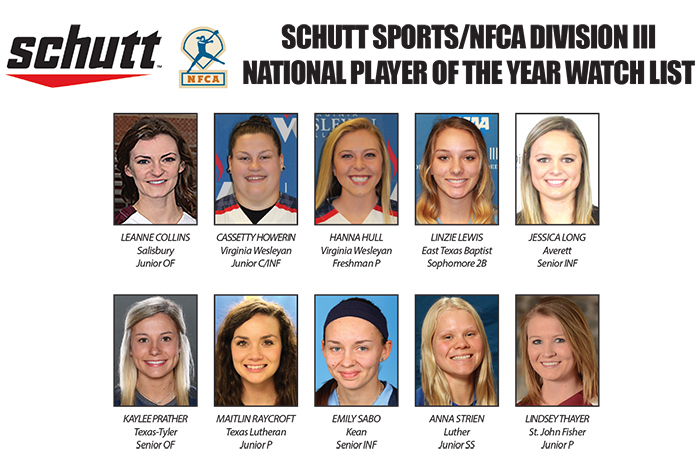 Just three student-athletes remain from the initial list of 50 released on March 10 — Virginia Wesleyan junior Cassetty Howerin, Averett senior Jessica Long and St. John Fisher junior Lindsey Thayer. The other seven finalists were added when the list was updated on April 21 to better reflect the best 25 players in Division III this season.

Current NFCA Top 25 leader Virginia Wesleyan has two players — Howerin and freshman Hanna Hull — on the list, while everyone else has one each, including senior Kaylee Prather of defending national champion Texas-Tyler.

Three 2016 NFCA All-Americans remain on the list — first teamers Howerin and Thayer, plus third teamer Long. Of the remaining seven members of the group, Lewis, Prather and Strien earned NFCA All-Region recognition last season. Among the other three, Hull and Raycroft were not in Division III last year.

The list is a collaborative effort between the NFCA’s Division III Head Coaches and All-America committees. The winner will be revealed following the conclusion of the season.